You wield a device that can make any item any size. A tree, a wall, an enemy, a passing cloud, even the levels themselves are all "SCALEable". Space is relative in the game so progress is as much conceptual as it is physical. The unique mechanic of SCALEing is inspired by games like Portal and The Swapper. Progression through the game is freeform and open like Mario 64 or early Zelda overworlds. It’s all about exploring and discovering secrets!

One might say that we've seen a resurgence (or maybe the birth) of the first person puzzle game since Portal graced the industry in 2007. Portal 2, Inverto, Magrunners, and many more have added their own style and twist on the genre. SCALE from Steve Swink and his team CubeHeart is set to join the genre pantheon with unique and innovative style and mechanics.

You play as Penny Price, a young physicist/inventor imprisoned for accidentally wiping out the east coast. Determined to escape her prison and save for cat, Price builds a homemade version of the powerful scaling device to break out. The wonderfully absurd story - penned by Dale Beran (author of acclaimed webcomic A Lesson is Learned but the Damage is Irreversible) and featuring the voices of Ashly Burch and Sarah Elmaleh - will have you traversing a world where prisons nestle inside other prison like nesting dolls and your therapist lives in your brain. 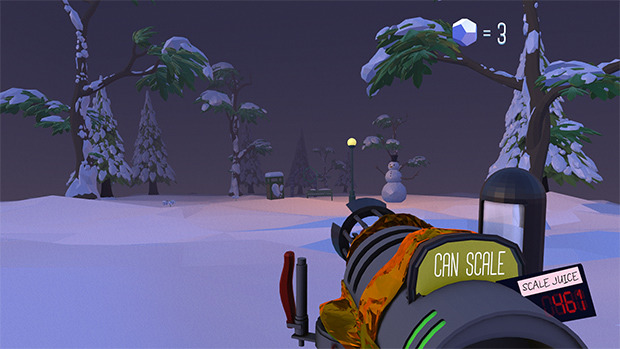 But the star of the game is its titular scaling mechanic. Using your device, you can grow and shrink nearly any object in the game, from a distant tree to that advancing spider to houses and chests. As you progress through the story and new worlds, your device will grow more powerful and offer new opportunities; where in one level you can scale objects, in another, you're able to manipulate the level itself.

However the focus of the game isn't on brain-wracking puzzles but exploration and discovery. Each world is an open playground to test your abilities, to explore and uncover secrets. While the scaling mechanic does allow for inventive uses such as boosting you into high jumps or creating weights for switches, the primary use will be to serve the exploratory aspects and create interesting landscapes to experience.

SCALE is planned for release in late 2014. You can support the game on Kickstarter.
Posted by Unknown at 12:53 PM