Spacedate 9118.5: Normal life was settling in after we got the O2 supply and refineries running. Our technician Carl had some spare parts from the refinery construction and managed to build a fusion reactor from these scraps, which is kinda incredible. No one had the heart to tell him that all our machines are, for some strange reason we've yet to discover, running without any power supply, though.

Spacedate 9118.10: We needed some bed rooms, and though totally unnecessary, we decided to build an orbital ring around our station in which the bed rooms are supposed to be located. Construction work started. Carl is constantly repairing the useless fusion reactor. Hopefully, we'll find him something else to do before he realizes that there is no food stored on the ship, except... us.

Spacedate 9118.15: The good news: We got visitors! The bad news: They are trying to kill us. For no apparent reason, as they just told us over the intercom. No one is trained as a guard, so we'll need to rush everyone through a quick 5 minute briefing, give them some weapons and hope for the best.

Spacedate 9118.17: We managed to defeat the intruders, but 4 of our crew died fighting them. Carl is currently still trying to put out the wildfire in the main hall. I need to go help him immediately or we might run out of oxygen.

Spacedate 9118.18: YOU HAVE REACHED THE LAST ENTRY OF THIS PROTOCOL


Spacebase DF-9 is a simulation game which takes more than a few nods from Dwarf Fortress. Before your fear of ASCII makes you run in away in panic, let me tell you though that the newer Dwarf Fortress style simulation games are actually rather accessible (the fantastic Gnomoria would be another example for this). Everything you want to do, can be done with a few simple mouse clicks through very self-explanatory menus.

I have a hard time imagining someone would ever feel lost with the way the UI is set up and I think Double Fine did a marvelous job at making it "work" intuitively. There are some kinks here and there, but overall its already surprisingly polished and workable. The developers also put an astounding amount of charm into the game through fitting flavor text and character animations. It is simply endearing to notice how Kevin tries to socialize with the other crew members, only to write down in his personal log later "Wont somebody be my friend? ;_______;". The gameplay itself will be familiar to those who already played similar games. The general premise is to expand your station, which you either do to build defensive measures and a bigger/better infrastructure, or to improve the life of your crew members. Enemies are, once again, the driving force behind the players construction plans. After you overcame the first enemy, your shrinking oxygen supply, you will likely be visited by raiders and pirates who are attracted to your space station. If I didnt mention it yet, the game is trying to kill you. Quite much. 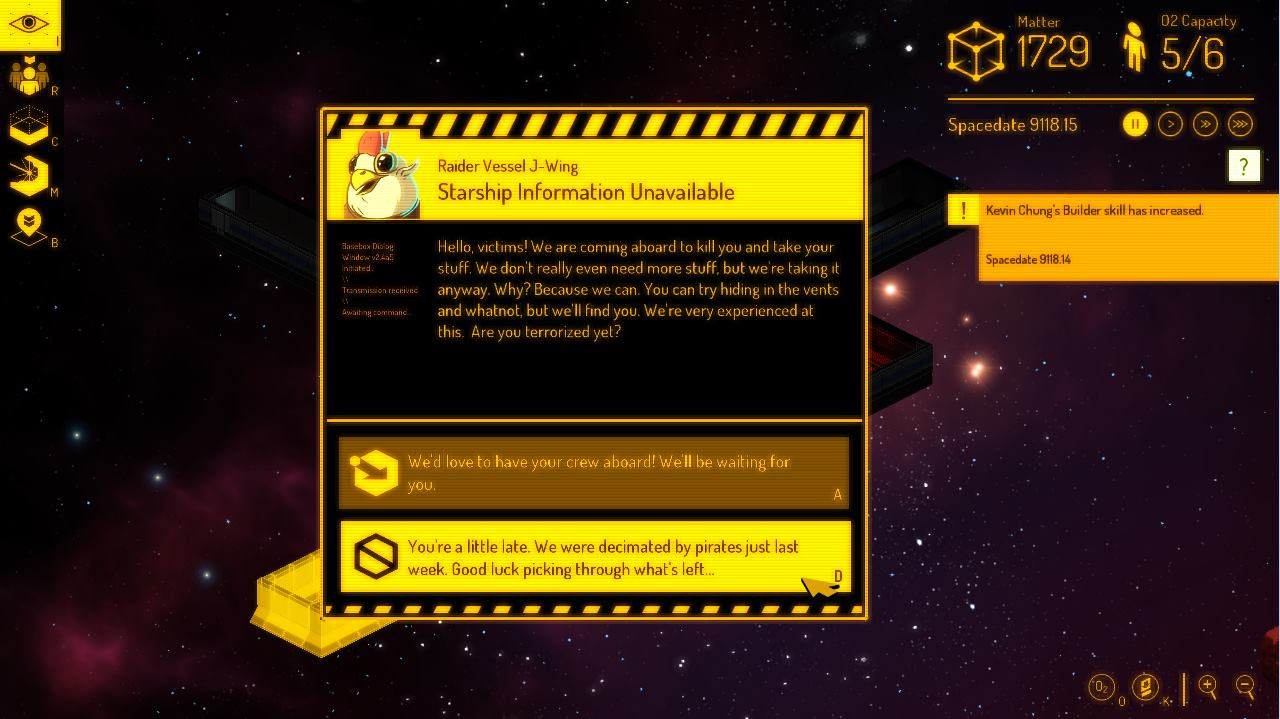 Spacebase definitely already works as a means to experience a story, because it makes you attached to what you are building, the people you are guiding and will make you experience loss, be that in the form of expensive materials being destroyed or lives lost. However, it currently does not work all that well as a "game", not because there is no way to win (which is very common in this genre), but because the game doesnt have enough options to create a balance of fairness and because it is missing longevity. You will learn to overcome some odds while creating your space station, but the odds are still massively stacked against you, because the player has not enough means to prepare for any danger. At its fundamental level, Spacebase currently has 4 different rooms with 1 object each and the desire to play Spacebase is largely driven by a creative desire to create a decent looking space station with people running around and to discover random relicts, other space ships and space stations which are filled with secrets. And those secrets are deadly, and usually come in the form highly trained raiders that take out half of your crew. Experiencing that once is fun and makes for a good story about heroic deaths, however experiencing that twice with no way to do anything about it is frustrating, because the current version of the game doesnt allow for learning from past strategies or mistakes and you are likely to die from the same dangers over and over again: 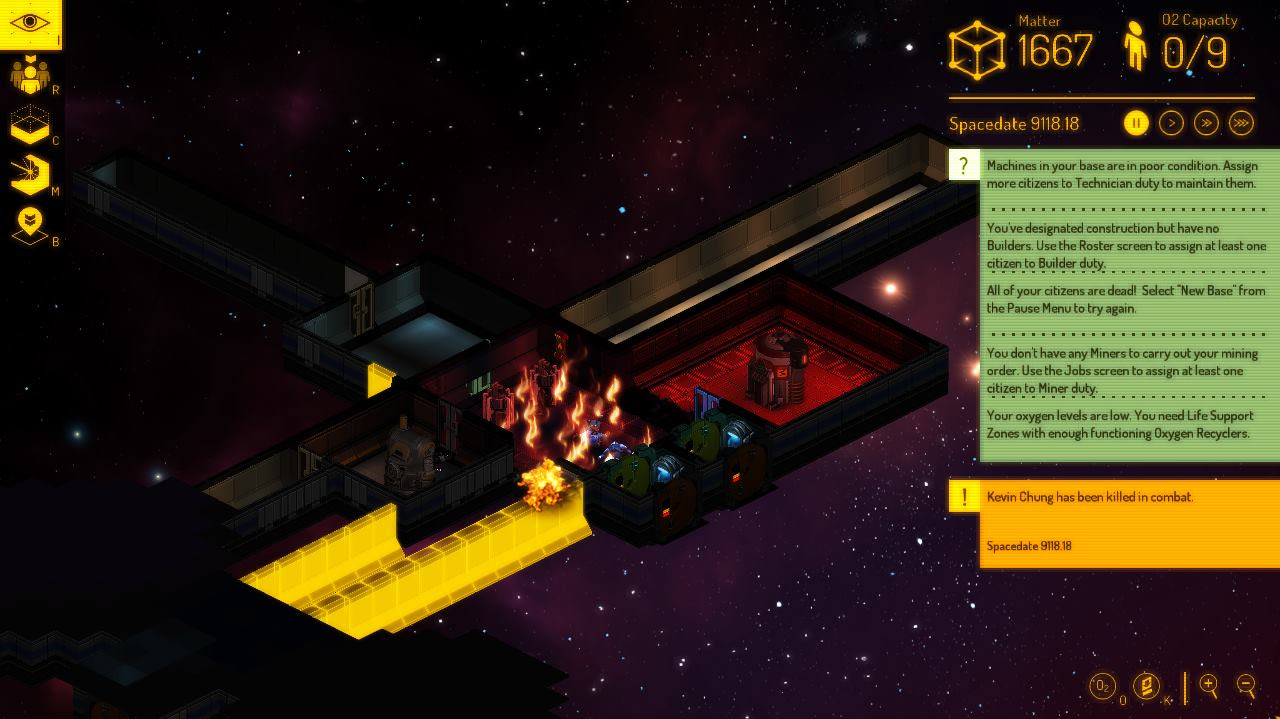 There are some more technical issues like path finding and glitches, but while I do think it is fair to tell the potentially interested customer about the shortcomings of the current version of the game, it also needs to be considered that the game is currently in alpha and therefore missing a lot of features and polish that we are going to see added over the next few weeks and months (years?) as it is currently far from being feature complete. A very good example of that would be how the game ends when you die. You will idle in space without any sort of screen telling you that your crew died. In fact you might not even have noticed that that the crew died if you were busy watching another part of the ship. If you want to get an idea of where the game might be heading in the long term, here is a long list of interesting features they are currently considering: http://spacebasedf9.com/devplans

This game shows a LOT of promise and has some very talented developers behind it that will likely not disappoint their customers in the long run, even if the early weeks might be a bit rough. Should you immediately go out and buy it? Probably not if you feel ripped off if you don't get enough content on day 1. Don't if you aren't prepared for the occasional bugs and instabilities. But if you aren't too tight on cash at the moment and like what you see and like the idea of revisiting a constantly changing game, offering new opportunities after every update, then join me and Double Fine on our way to conquer die in space.

You can purchase Spacebase DF-9 from the developer's site or on Steam.
Posted by Unknown at 11:29 AM