Title: Sunless Sea
Developer: Failbetter Games
Platforms: PC, Mac
Price: $18.99
---
When the Kickstarter for Sunless Sun was going on, I'll admit that I hadn't been that interested ...and then I checked out Fallen London. I was instantly hooked by the mix of Lovecraftian, Gothic, and steampunk elements, the sense of dark wit, the interesting world and lore. Fallen London is extremely well written, bringing the dark atmospheric place alive with vivid descriptions. It's a world I wanted to explore and with Sunless Sea, I can.
Sunless Sea lets you explore the vast Unterzee, a sprawling expanse of ocean deep beneath the earth where grotesque things and terrible fates await those who dare venture into the abyss. As captain, you command your vessel and crew as you discover new lands, fight dangerous enemies, upgrade your ship with better parts and new weapons. Starvation, madness, mutinous crews, and horrors beyond comprehension await out on the black waters. You travel the sea, always mindful of your fuel, your food, the sanity of your crew. Pirates and worst things move across the water.

Combat is quite interesting. In the damp dark of the Unterzee, light is your greatest ally. When fighting you have three category of actions: offensive (cannons, torpedoes, etc.), illumination, and evasion. Each action takes a certain amount of time to enact, and you can pause the fight and queue commands. You need to illuminate your enemy to be able to attack and also want to perform evasive maneuvers to reduce how illuminated your ship is. It's definitely an interesting take on combat, not real time but not turn based either, with a nice strategic depth

However, the meat of the game is exploration, discovery, and the cost of pursing such goals. In the same vein as FTL and Project Zomboid, Sunless Sea is very much a "story generator". You encounter new places, collect weird and mysterious cargo from travelers, set out on quests, gather a crew, choose to stay among known islands or brave the suffocating dark of uncharted waters. Maybe your crew will go mad. Maybe you'll discover some incredible fortune. Maybe you'll run out of food and need to eat your mates to survive. Great adventures and horrific misfortunes alike are out there for you to find and like Fallen London, it's all delivered through such atmospheric writing. 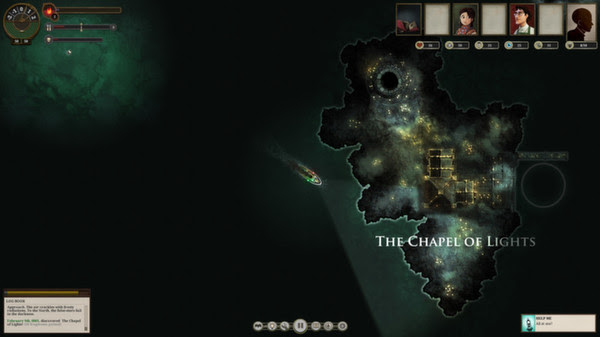 Sunless Sea draw you into its Gothic landscape through its vivid descriptions and compelling world. The developers plan to expand the game with new enemies and beasts, new areas and islands, deeper crew and ship mechanics, a randomized sea to explore, and improved visuals. You can learn more about the game here and purchase it from the developer's site and Steam.
Posted by Unknown at 6:02 PM