Title: The Nightmare Cooperative
Developer: Lucky Frame
Platforms: PC, Mac, Linux
Price: $9.99
---
If you go into this game expecting a grand and complicated experience, you'll probably be disappointed. The Nightmare Cooperative is a compact game, a roguelike distilled to its base elements. You won't find complex skill trees, or a multitude of loot to collect and equip, or expansive environments for you to explore and perish in. That's not a bad thing; if you're looking for something simple but challenging, simplified yet also strategic and tactical, The Nightmare Cooperative excels.
The set-up is simple, a framework for the action rather than an extended narrative. Your village is in disarray; go out, gather gold, fight monsters, survive. The core of The Nightmare Cooperative is its gameplay and that aspect proves to be much deeper and more engaging than the story. If you've familiar with Michael Brough's 868-HACK, you'll feel right at home among Nightmare's enemy-filled rooms. Similar to that game, your goal here is to amass a high score, the amount of gold you collect equaling your final score. Opening chests rewards you with gold and spawns enemy so choosing whether to rush for the exit or increase your score is a crucial choice. Enemies move when you move so each step forward is a strategic decision that, when combined with the game's mechanics and varied foes, gives The Nightmare Cooperative a methodical, puzzle-esque vibe. You don't control a single hero in Nightmare, but rather an entire group at once, each hero moving and using their special abilities simultaneously. Each hero is unique and positioning and formation is important since their abilities are only effective under certain conditions. The Archer can only shoot enemies directly ahead, the Mage can hit enemies on diagonals, the Warrior can perform two strikes in one move, the Ninja can pass through enemies, and so on for the other seven heroes. Supplementing these abilities are items that provide special perks, such as extra life at the expense of mana or not spawning enemies when opening a chest. The enemies you face are equally varied and cement the game's strategic puzzle atmosphere. Some enemies travel along predictable paths. Others mirror your movements or move extra spaces in a turn. Turrets rotate and fire in intervals. All this knowledge is always at your disposal and define how you position your heroes, which heroes are best for a given room. Managing four heroes at once, while timing and syncing your movements to evade enemies or get into formation to attack a desired enemy with a specific ability, is a satisfying challenge. It's best to approach each move in The Nightmare Cooperative slowly and carefully, taking the time to plan out your next steps, thinking about where you are and will be in relation to enemies and hazards. A poor decision can easily find your heroes scattered across a level, cornered, a beneficial move for one character being dangerous for the others. 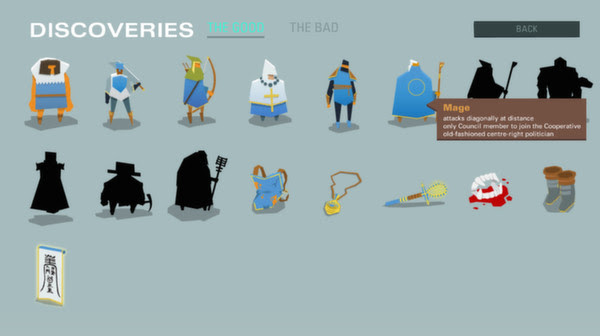 The colorful distinct art style rounds out this compelling package. The Nightmare Cooperative is all about the gameplay, the turn-for-turn decisions that make the best roguelikes so satisfying. Those looking for something with more depth may find the game lacking, but the strategic gameplay, varied heroes, and one-more-go appeal makes The Nightmare Cooperative a worthy addition for fans of the genre. The developers plan to add a challenge mode that will feature rooms with predetermined heroes, enemies, and layouts designed to test your strategic prowess. A mobile version is also in the works, with an estimated release time frame sometime later this year.

You can purchase The Nightmare Cooperative from the developer's site, Steam, Humble, and itch.io.
Posted by Unknown at 3:01 PM