Title: Shattered Planet
Developer: Kitfox Games
Platforms: PC
Price: $14.99
---
Shattered Planet was originally released on IOS back in March. Now the sci-fi roguelike has come to PC, and with the added content and improved visuals, it's the definite version of this fun challenging game.
Setting out from your orbital home base, you explore alien planets, collect new weapons and gear, fight off dangerous species and powerful enemies. The wealth of equipment and customization at your disposal is easily one of Shattered Planets highlights, from devastating guns to primitive clubs and electric blades to a vast array of helmets and armor, different classes to choose from, to pets that tag along. You'll need all the help you get can, as Shattered Planet delivers a challenging tactical experience. A fog of war shrouds unexplored areas, revealing precious resources and enemies as you explore. Turn based movement and combat means each move must be considered, and if you aren't well equipped, or prepared, you'll find yourself quickly surrounded and cornered. As usual with the genre, death results in the loss of your current items and gear so playing smart and cautiously, picking your battles, is key to survival. If the core game isn't hard enough, Shattered Planets offers more challenging difficulty modes, as well as daily challenges. 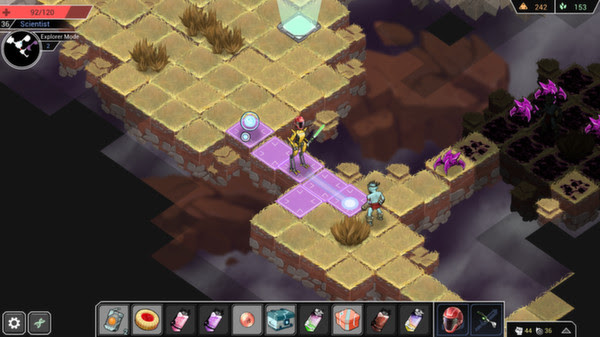 If you've played the IOS version, Shattered Planet on PC version improves on the mobile game by stripping out the IAP and rebalancing the experience for a premium experience and adding features such as the daily challenges, new classes, the ability to capture pets, and the keyboard/mouse controls just feel more precise than the touch controls ever did. You can purchase Shattered Planet from the developer's site and Steam.
Posted by Unknown at 2:21 PM