In Interstellaria you command a crew of eager explorers. Combat, trade, and diplomacy is handled by giving your crew commands. Survival means watching out for hull leaks, defeating hostile invaders, and destroying enemy vessels. You have to balance pushing your crew to learn new skills, while also keeping them fed and rested. In addition, at any time you can take complete control of the captain and adventure planet side to collect important artifacts, ship resources, and valuable data.


We've explored distant worlds and alien landscapes and games like FTL has put in the captain's chair of our space-faring vessel. Interstellaria promise to combine on-foot exploration and combat with stylish pixel graphics and a vessel and crew to maintain, and care for. 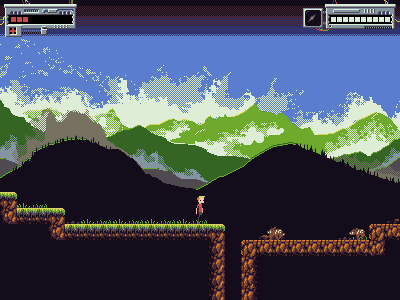 Interstellaria is a game of two distinct halves. One half is maintenance and travel. Granted a ship to travel across the universe and distant systems, you must equip and maintain the integrity of your ship, and furthermore the crew housed within. Ships can be upgraded with new and better equipment, and crewmembers can boost the stats of your vessel. Hull leaks, invaders, life support failure, and enemy ships are only some of the threats you'll face, and the health and vitals of your crew will always be a concern. But not all every encounter must be resolved aggressively; you'll encounter scenarios that offer moral choices and friendly alien races. The other half is on-foot exploration of planets; as the captain, you'll land on these worlds, outfitted with specialized armor and weaponry, and fight an assortment of enemies and bosses, gather loot, and unlock new equipment and ships. Every world is unique, with its own hazards and style.

Interstellaria is planned to be release in December 2014. You can support the game on Kickstarter
Posted by Unknown at 8:52 PM