The Watchlist: Fara & The Eye of Darkness


A roguelike with a card-based spell/combat system

Fara & The Eye of Darkness is an upcoming action roguelike that combines fast-paced arena combat with deck-building/card game mechanics, as you face fierce enemies with an arsenal of powerful spells. 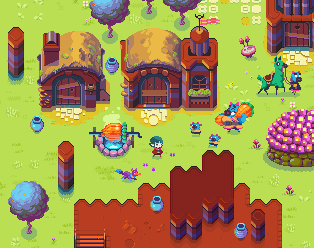 As the titular demon witch, you're determined to cure your world of an insidious corruption that's twisting the good animals and inhabitants into aggressive monsters. To defeat this evil and her malevolent siblings, Fara must use an expansive array of spells, ranging from speedy dashes and devastating energy blasts that scar the battleground as they barrel through enemies to fiery sprays and crackling bursts of magic that strike multiple foes at once.

Enemy encounters transports you to smaller arenas that truly test your agility and smart use of the cards in hand. Between fights, you'll explore a procedural overworld filled with towns, shops, and NPCs, and building your deck from defeated enemies, shops, and looting chests throughout the world.

Fara & The Eye of Darkness is still quite early in development, and is expected to release sometime next year. You can find more spell GIFs and follow the game's progress on Twitter.
Posted by Unknown at 12:09 AM