Title: Avalanche 2 - Super Avalanche
Developer: Beast Games
Platforms: PC
Price: $9.99 (currently 50% on the game's site)
---
One trailer calls Avalanche 2 a "massively expanded sequel." That phrase couldn't be any more accurate. Avalanche 2 takes the foundation of the flash game and layers tons of fun new additions on top of that original framework.
The general gameplay remains the same. Your little chalk-white figure starts at ground level and blocks of various sizes fall from above, building towering structures to ascend as high as possible while avoiding getting crushed. Take too long and you'll get engulfed by rising lava. The gameplay is intense, as you avoid destruction by mere moments and make risky leaps to safety. But Super Avalanche certainly lives up to its name with a myriad of new mechanics that take the formula far beyond the original game: power-ups ranging from jetpacks to shields, coins to purchase upgrades and customization items, enemies to evade and defeat, bosses to overcome, dangerous hazards to avoid, shops to purchase items, banks to store or withdraw coins, and more. 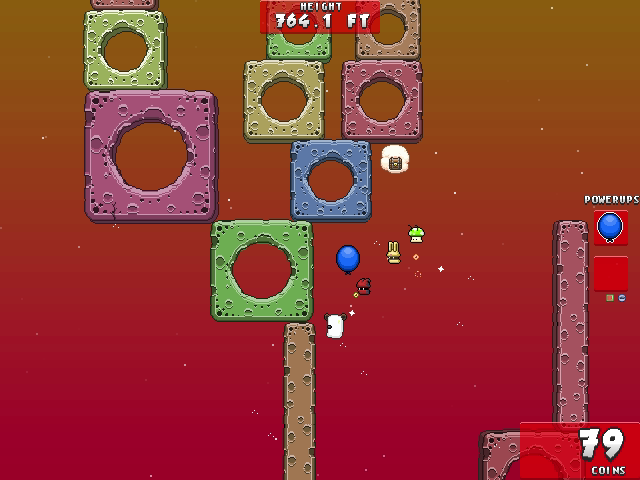 Combine all these new aspects with the same challenging mix of evasion and platforming and you get a rewarding challenging game that's still being updated with new content. There's even a co-operative mode so you evade death with a friend. You can purchase Avalanche 2: Super Avalanche from the developer's site or Desura, and vote for the game on Steam Greenlight.
Posted by Unknown at 4:02 PM