Developer: Dodge Roll
Platforms: PC, Mac, Linux, PS4
Price: $14.99
---
Perhaps the most apt and concise description for Enter The Gungeon would be the lovechild of The Binding of Isaac and Nuclear Throne. The crazy weapons, stacking items, weird enemies, and random loot of the former, the fast-paced, hectic, evasion-heavy action of the latter. But on the other hand, that label is a disservice to Enter The Gungeon. While it certainly has the DNA of those other titles, the game most certainly has an identity and style all its own.
The Gungeon awaits. A mysterious temple, where many venture to seek out the ultimate treasure, a gun that destroy their past, where lead cults and ballistic inhabitants thrive, an ecosystem in its own right. As one of four heroes -the Convict, the Marine, and so on - you descend into the randomly generated depths, armed with only a mediocre starting loadout and your skills to survive.

Skill is perhaps the most crucical aspect that elevates Enter The Gungeon above other entries in the action roguelite/shooter subgenre. When loot pickups fail you, when you're having bad run, when you're low on heath or getting surrounded by bullets and enemies, you can always rely on the dodge roll. With precise timing and leaping at the right angle, you can dodge anything, from masses of bullets to screen-slicing lasers. Combined with limited ammo and the need to reload, Enter The Gungeon is easily the most skillful game of its ilk.

But dodging will only get you so far. And thankfully, as you might expect from its title pun and its firearm-themed stages, Enter The Gungeon offers a vast and varied selection of weapons and items to find. While the basic AK-47s and sawed-off shotguns and machine pistols feel satisfying to use, they can't compare to weird wacky weapons you'll find in chests or buy from shopkeepers. One gun fires an egg bullet that unleashes tiny homing baby bullets. Another throws out globs of oil that you can ignite when the gun switches to fireballs upon reload. Other guns freeze, poison, set aflame, convert to your side, electrify. And more still throw off t-shirts and bees and junk mail and other exceedingly silly ammunition. Each weapon feels unique, some designed for specific situations while others are room-clearing monsters that can end a boss in seconds.

Items, both active and passive, only add to that variety. Much like Isaac, the stat increases and weapon buffs can stack in myriad ways, from swapping out your dodge roll for a jetpack to increasing your movement speed to more unique effects such as linking bullets with chain lightning and causing ice shrapnel to shred the room when you get damaged.

As you progress, you'll encounter NPCs hidden in the dungeons, trapped in cages, waiting to freed. Once rescued, they'll show up in levels or back in the hub area, opening new shops where you buy items and weapons to add to the randomized loot pool or shortcuts or offering side challenges for money and rewards. 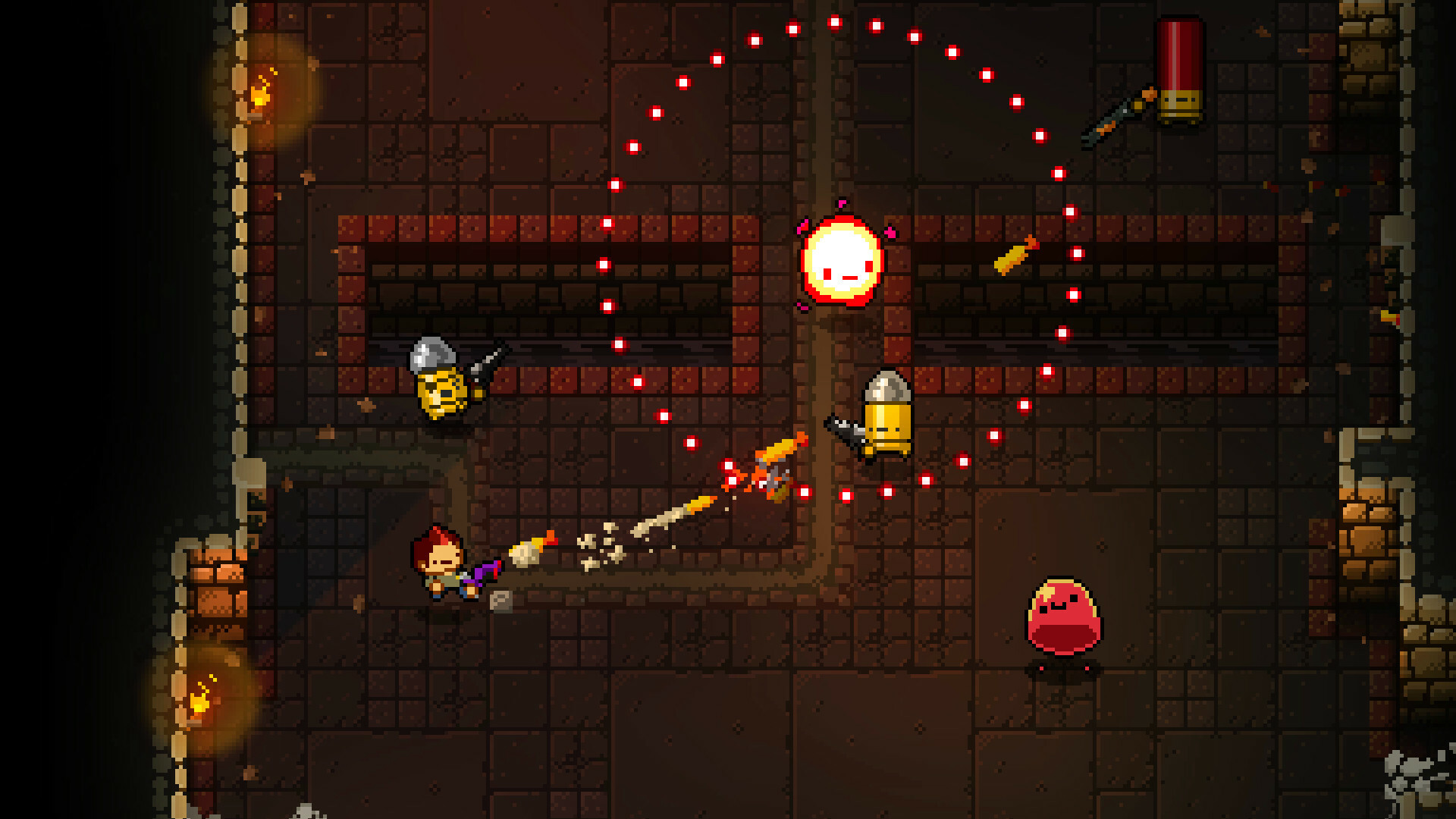 But more than the weapons and the items and the dodge roll, it's the little touches and environmental details that make Gungeon's combat so satisfying. The way dead enemies and debris can flung aganst the walls by the force of explosions. How book pages flutter and drift across the floor as you fight in a library, How oil stains the ground and leaves scorches marks in carpets once a fire dies down. Your reflection in pools of water. The puffs of smoke and particles from bullets hitting the walls and barriers.

Enter The Gungeon takes the best elements of the subgenre - the fierce combat, the thrill of uncovering new weapons and discovering powerful synergies between items, the sense of mastery and progression - and blends it all together in a single polished package. You can find the game on Steam, Humble, GMG, GOG, and PS4.
Posted by Unknown at 4:10 PM