Title: Hyper Light Drifter
Developer: Heart Machine
Platforms: PC, Mac, Linux
Price: $19.99
---
Besides Rain World, Hyper Light Drifter was perhaps my most anticipated game funded through Kickstarter. Not only due to its wonderful pixel art, fast-paced combat, and intriguing world, but also because it was the game that introduced me to crowdfunding. So my expectations were quite high, and thankfully Heart Machine's debut project succeeds on every level, delivering a challenging action-adventure through a mysterious sci-fi world.
A cataclysm has occurred, and in the aftermath, the Drifter arrives. Armed with an energy sword and gun, draped in a flowing purple cloak, he soon finds himself afflicted with an otherworldly corruption and embarks on a quest across the four corners of the land to cure himself. All this is presented to you wordlessly, through cutscenes and vignettes that leave it up to you to understand and interpret the story.

This elegance of the subtle storytelling also weaves its way into the world. Each area is one of gorgeous pixel artistry, lavish details, and vibrant colors: the gargantuan remains of titans now choked with flora, technological ruins, windswept peaks, bustling town square, dim subterranean tunnels. An abstract map guides you through these environments, but it's the sense of discovery and mystery and allure of secrets that drives you onward.

Hyper Light Drifter's beauty is only surpassed by its danger. A deadly menagerie of foes await, from avian mages that unleash devastating short-range lasers and lupine samurai that teleport-dash towards you with their blades to shuriken-armed toads and towering crystalline beings. Innocuous flowers erupt into hulking beasts, heavily-armed creatures fire bullet hell-esque volleys of projectiles, and relentless bosses unleash multi-tiered attacks that test your evasive prowess.

To the new Drifter, this onslaught of enemies, as groups encroach from all angles, and bullets and lasers threaten to chip away at your precious five hit points.can seem overwhelming. But soon the lessons become clear. Never slash mindlessly, but with confidence. Always watch for enemies' telegraphs and tells. Shoot from afar to even the odds before you engage up close. While Hyper Light Drifter's combat is fast and fierce, it isn't hectic. Precision, timing, carefully timed dodges, using the environment to split up or funnel groups, prioritizing enemies, knowing when to slash or shoot or when to break away and heal. Every encounter is manageable, every enemy able to slayed. Once you've mastered the rhythm and pacing of the combat, clearing areas with expert evasion and combos of blade and bullet never ceases to feel satisfying.

But perhaps skills alone aren't enough. As you defeat enemies and explore, gold credits allow you to purchase new abilities and weapons from shops. The multi-dash lets you flank around ranged enemies with ease; a shield lets you absorb several bullets, A grenade gives you a powerful area-of-effect attack that can clear entire groups when used at the most opportune moment. A charged attack can decapitate multiple enemies with a single strike, while a jabbing blow can stun a foe for a few precious moments. Following your melee attacks with a point-blast shotgun blast can devastate, while a rifle can snipe lurking enemies from a distance. Each of these upgrades expand your moveset in useful ways, giving you myriad ways to handle any battle.

And yet even with the intriguing environments and fast punchy combat, it's the little details that can make a great game, special. The way you can sit down at any time to just relax and admire the environment. The snowy footprints and pools of blood you leave in your wake. Your cloak flying and fluttering with each strike. The fancy sword flourish the Drifter performs after a particularly challenging battle. The dust-throwing skid at the end of a dash. The charming animations of town NPCs. 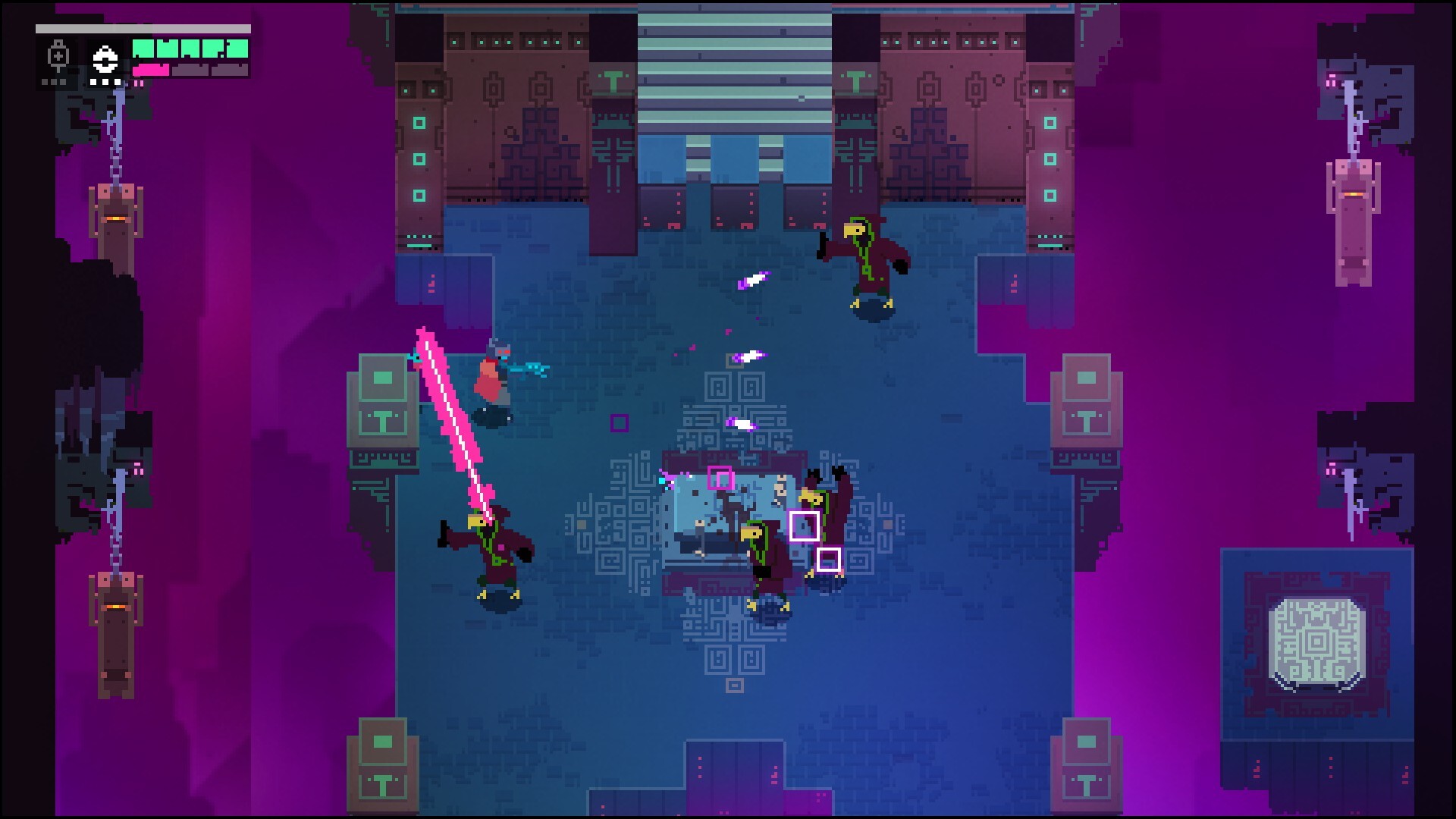 Hyper Light Drifter is rife with secrets to be found and hidden areas to seek out, behind camouflaged paths and invisible walkways. New Game Plus offers a new challenge, carrying over your upgrades but reducing your health, a true test of your combat skills. A first playthrough might take around 6-8 hours, but much more awaits your Drifter.

Hyper Light Drifter is available on Steam, Humble, and GOG. Console versions are coming later this year.
Posted by Unknown at 8:32 PM