Trestle is a hectic arcade game about standing your ground, testing your skill, and grabbing as much weaponry as you can.

Sets and Settings is no stranger to quick arcade gameplay; their previous IOS release Irrupt was a fast paced game of fast timing and evasion. But their upcoming Trestle looks to take that gameplay theme, turn it up to eleven, and imbue with an expansive arsenal, a plethora of enemies, and twitchy reflex-testing action. Set on a 3x6 grid, half of this confined arena belongs to you, where you move between spaces, collect weapons and picks up, and generally just try to stay alive. The other half is where all manners of dangerous projectile-spewing, area-smashing, laser-wielding robotic enemies appear. A frantic dance of close calls, evasion, and gunfire ensues, and you'll soon learn that even your safe area isn't as safe as it appears, since enemies can damage tiles or restrict your movement with energy pillars and lasers. Luckily, your character has a wide range of weaponry at his disposal, from your standard plasma bolts and flame thrower to a deadly disc gun and missile launcher. 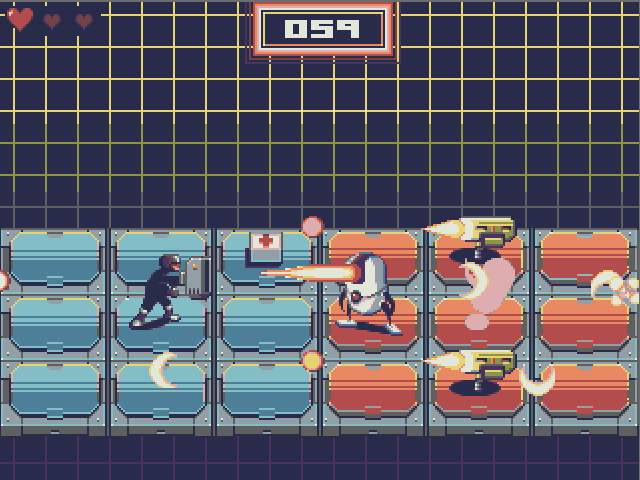 Trestle will be releasing in 2014, along with several unlockable characters and multiple difficulties. You can learn more about Trestle and follow its progress on the developer's Tumblr.
Posted by Unknown at 10:30 PM