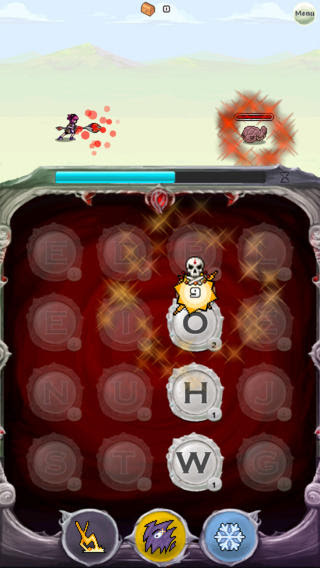 Perhaps the most similar game would Spell Quest, another IOS word game with some RPG elements. But Word Mage has several elements and mechanics that make it the superior more challenging experience. The set-up is simple: your titular mage is at the top of the screen, facing off against various monsters. Chaining together letters to form words results in an attack; the longer the word, the more powerful the attack. What makes the gameplay so intense and adds a element of urgency is the timer. A bar decreases as you play, getting hit makes it reduce faster, and killing enemies restores some. When the bar is fully depleted, you fail. You really need to assess the board fast and weigh the choice of short but less damaging words over longer words that will take longer to find. It's truly a race against the clock, since the longer you take, the less time you'll have on the next wave of enemies. You need to be quick and always planning ahead, with only seconds to do so. Other elements add more complexity and challenge: you can only use words once and the board doesn't scramble, harder difficulties for each level that add more and harder enemies, leveling up, items to collect to create new powers, different powers to discover and equip. 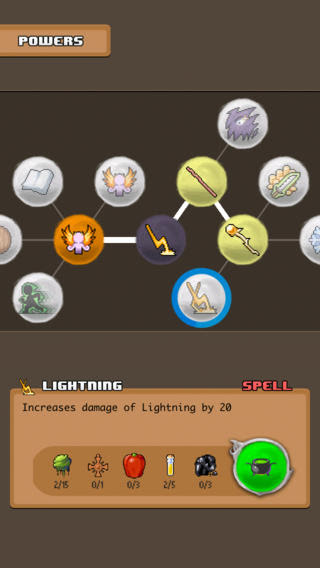 Word Mage's passive and active abilities, such as Overcharge which makes five-letter words stop time to lightning attacks, add a strategic element not seen in other word games and the skill tree is quite varied. The charming pixel graphics, intense fast-paced wordplay, and surprisingly satisfying blend of RPG and word game makes Word Mage well worth your time. The developer will be adding more achievements and an endless practice mode in the first update and is working on an arena mode with random enemies.