Title: Pocket Moto X
Developer: Mark Kevern
Platforms: IOS Universal
Price: $0.99
---
Say "2D bike game" and more often than not, you'll lose an IOS gamer's interest pretty fast, which is probably why Pocket Moto X had gone unnoticed for six months. The genre is almost ubiquitous on the platform, but Pocket Moto stands out due to its polish and Trials-esque gameplay.

What I found most appealing about Pocket Moto was its colorful art. The world is vibrant, and peppered with little touches such as how the world gets dark and shaded when you enter caves. Those details extend outside of the visuals as well, from the character bios to their different poses in the bike selection screens. It's those details that make Pocket Moto stand out from the many other bike games on IOS. The gameplay also doesn't disappoint in the gameplay; while not as fast or challenging as Bike Baron, Pocket Moto's levels require a similar finesse as you leap over gaps and maneuver your bike through tough obstacle courses. It's fun, the controls are responsive, the physics feel finely tuned. 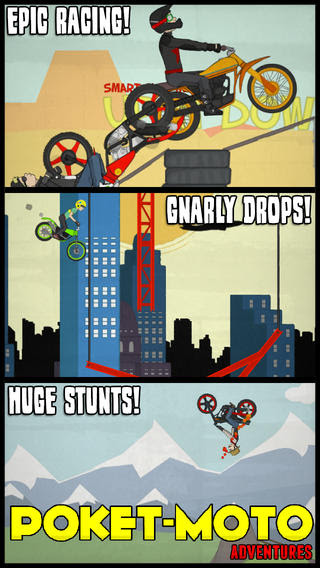 Pocket Moto X is a fun charming hidden gem for fans of Trials-esque games. You can purchase the game for $0.99.
Posted by Unknown at 12:29 AM