Title: Gang Beasts
Developer: Boneloaf
Platforms: PC, Mac, Linux, Android, WiiU, PS4, XBox One
In development
---
Gang Beasts is a stupidly silly local multiplayer party game with doughy ragdoll physics and horrific environmental hazards.
I'll be honest. I first saw a screenshot of Gang Beasts during Screenshot Saturday. It looked interesting but nothing really jumped out at me as amazing or something to be hyped about. And then I read this great RockPaperShotgun preview and realized that was a mistake. Gang Beasts is awesome.

Even in its extremely early playable alpha, the game is one of the most fun and funniest I've played in a while. RPS was right when they said "every fight turns into a desperate action sequence." Gang Beasts is pushing and prodding your opponent into an industrial grinder. It's having a four-way brawl atop speeding trucks. It's punching your opponent in the face while both of you dangle from a window washing platform. What's more, those exciting fights are incredibly simple to control - keys for movement, for punching and grabbing - and your cute colorful brawlers all have physics-based animations that add some satisfying yet oddly hilarious brutality to every fight.

And that's only the 0.0.1 alpha. Reading through the developer's IndieDB and Greenlight pages, they have even greater ambitions. A shopping mall with glass elevators to fight on top of. A hotel/casino featuring a bar for a good old-fashioned bar brawl. A construction site with destructible walls and floors to smash through. An amusement park with a Ferris wheel and roller coaster to fight on. Levels ranging from fights in the middle of freeway traffic to fights on top of a train. A single player mode with levels and bosses. Various moves like headbutts, elbows, and evasive dodges. It sounds incredibly promising and the alpha is a clear evidence that Boneloaf is well on their way to achieving those goals. 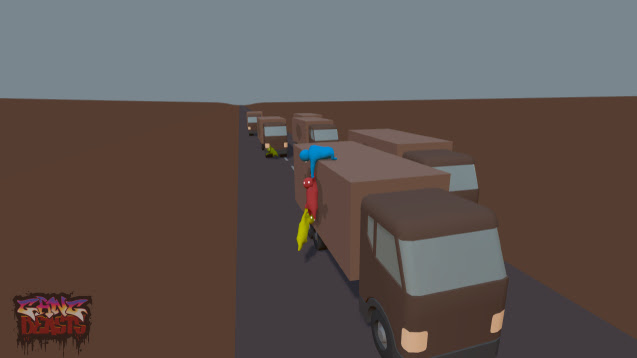 Gang Beasts is still in early development. You can download the alpha here; it's currently multiplayer-only, with up to four players able to brawl locally across several levels, but the developers plan to add AI bots and a Sandbox mode in the next build. You can learn more about Gang Beasts on its IndieDB page and vote for it on Steam Greenlight.