No Money, No Problem: Bosses Forever

Title: Bosses Forever 2.Bro
Developer: TOO DX
Platforms: PC, Mac, Linux, Browser
---
Bosses Forever is stuck in Greenlight hell and that's a damn shame. I first learned about the game today, thanks to the Monthly Showcase over on r/gamedev, and it only took one playthrough to see that Bosses Forever is a fun charming challenging game that deserves far more attention.

Warning Forever was the first game I know to introduce the concept of an adaptive boss, an enemy that evolves and adapts to your playstyle. Surprisingly few games have attempted to put their own twist on the mechanic, but Bosses Forever does and does so admirably. Playing solo or cooperatively, you control your floppy haired, gun wielding character as you face off against a series of increasingly challenging bosses. The controls are simple, but very responsive, allowing you to precisely wall jump, dash, and evade the myriad projectiles that comes your way. With each new foe, Bosses Forever quickly enters crazy bullet hell territory as you deftly maneuver around missiles and all manner of bullets and explosives. And like the game that inspired its name, bosses will adapt to your tactics: if you stay in one spot, expect homing missiles soon, stick to the walls, and you'll have wall riding energy projectiles to deal with, and more. 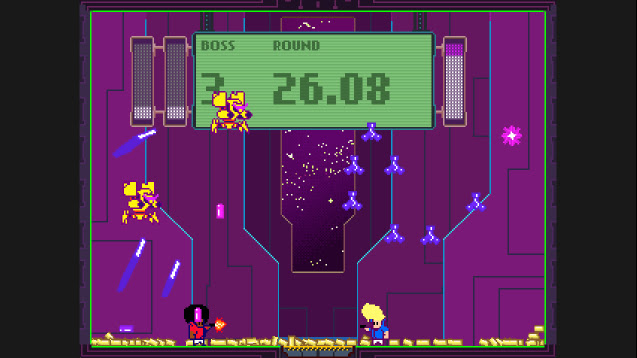 Bosses Forever offers a challenging 2D arena twist of Warning Forever's concept that requires skill and precision to survive and is just a fun frantic experience. You can play or download the game here and vote for it on on Steam Greenlight.
Posted by Unknown at 2:54 PM