Outer Wilds still in development
Outer Wilds is a game I've praised several times here, a freeware game that captures the feeling and atmosphere of discovery in an unexplored space frontier. What I didn't realize was that the game was only an alpha and, in a recent update, developer Alex Beachum stated


We’re currently working towards a full release of the game, which will feature (among other things) a completely fleshed-out version of the overarching mystery. The alpha release will remain available in the meantime, so feel free to check it out (if you haven’t already exhausted its secrets) while we work on the full release.

Transistor available to preorder
SuperGiant's follow-up to its acclaimed debut Bastion, Transistor leaves The Kid behind and drops the player into a gorgeous sci-fi city. But the satisfying combat, atmospheric world, and RPG elements remains intact, as you guide Red in her fight against The Process and wield the powerful Transistor, an intelligent weapon that grants you devastating attacks and abilities 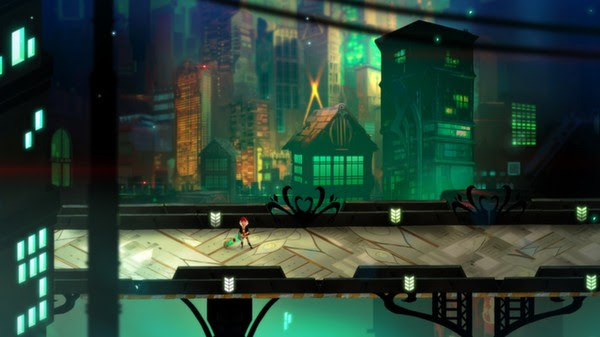 You can preorder Transistor through Humble or Steam. The game releases May 20th.

Twin Souls reveal
Path of Shadows was a very promising student project, a stealth game where darrkness was your weapon as you stalked through cell-shaded fantasy environments. I was happy to hear that the developers planned to expand the prototype into a larger experience. That game has finally been revealed.

Now titled Twin Souls, the game is described as a spirtual successor to the original student project, "a 3D indie stealth game in which you control a warrior with the power of Shadow Control. It combines the essence of Tenchu with the modern approach of recent gems like Mark of the Ninja and Dishonored."
You can keep track of Twin Souls on the Lince Works and David Leon Twitter pages. A Kickstarter for Twin Souls is starting soon.
Posted by Unknown at 2:47 PM