Title: Overgrowth
Developer: Wolfire
Platforms: PC, Mac, Linux
Price: $29.95
---
Overgrowth has been in development since late 2008. That's almost six years. For a small indie team developing such an ambitious title, Wolfire should be commended for staying true to their vision for the game and maintaining regular builds and progress updates for such an extended period of time. But the question is whether Overgrowth is worth playing and I'd say it's become my most-played indie in months.

Now Overgrowth isn't complete by a long shot. It's still lacking a real campaign or story and the available content consists of a few challenges, several maps ranging from parkour-friendly courses to open areas with enemies and an arena. There's a robust user-friendly editor and a growing library of user content and mods. However that's not what makes Overgrowth so fun, so addicting, and challenging. In my opinion, gameplay itself is paramount to making or breaking a game, and Overgrowth delivers in spades. The combat is up there with Arkham Asylum as my favorite fighting system in a game, simple to control yet complex in its execution and endlessly satisfying to watch. From agile evasion to smooth judo counters to tense knife fights or rolling under a swinging blade and digging a spear into an enemy's chest, the combat is just glorious fun.

The movement alone offers some of the best 3D platforming I've played since Prince of Persia in 2003. You're fast and insanely maneuverable, able to jump huge distances, wall run with ease, bounce between walls and roll under obstacles. Speed running through the community parkour maps is so entertaining. But Overgrowth isn't just great in its execution, but as a whole package inside and out. The anthropomorphic animal warriors and the semi-realistic atmosphere bring to mind classics like Redwall and Watership Down, and the brutality only cements those associations. A fight isn't just a simple exchange of blows; blades and hard hits leave bloody wounds across the body, blood that drips and stains in physics-accurate patterns. Fatal impacts against hard surfaces are accompanied by crunching bone. A stealthy neck slice sends arterial spray everywhere. A tough fight leaves you bloody and battered. Dodge at the wrong time and a kick will impact your head with a tangible sense of weight and momentum. It's these details and aspects that make the game such an enjoyable experience 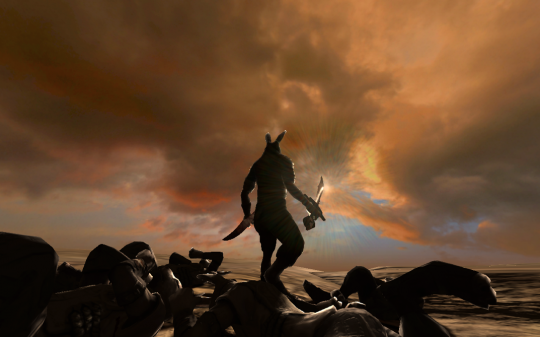 But there's more to come, from the proper integration of species like dogs, rats, and cats, and a full story. The backstory of the world has already been fleshed out in Lugaru and this fascinating digital comic and if the game's story is as engrossing as the stories in those pages, Overgrowth could truly be the Redwall of gaming. You can purchase Overgrowth from the developer's site or from Steam.
Posted by Unknown at 12:42 PM