Indivisible is a side-scrolling RPG in the vein of Valkyrie Profile, spanning a huge fantasy world inspired by our own world’s various cultures and mythologies

Lab Zero's Skullgirls was a gorgeous fighter with incredible hand-drawn animations, and now they're applying that artistic approach and polish to the RPG genre, with their next project Indivisible.

Indivisible follows young Ajna on her journey to learn the truth behind both a devastating attack on her home and a mysterious mystical ability awakened within her. Ajna's quest will take her across the globe, through lands inspired by Japanese, Central American, and other mythologies and architecture. 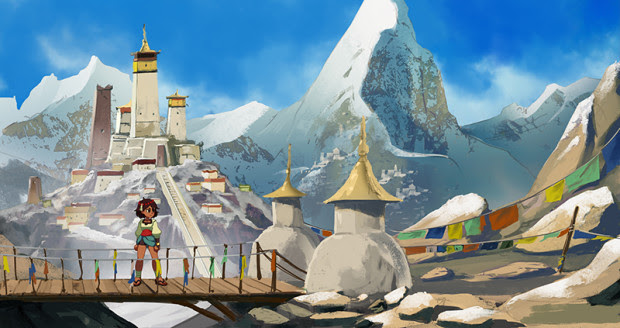 Indivisible is split between two types of gameplay. Exploration revolves around Metroidvania-esque platforming, as you wall-jump and dash through towns, temples, and other varied locations. As you progress, Ajna will gather new items and skills to traverse the environments in new ways, from clambering up walls with your axe to swinging across gaps with a rope dart.

But you're not the only one roaming these locations; dangerous enemies lurk as well. Running into them or getting attacks seamlessly shifts the gameplay to Valkyrie Profile-inspired combat. Ajna has the ability to absorb special individuals and manifest them as incarnations in battle.

From the master archer Zebei to the sword whip-wielding Tungar, you'll be able to fight alongside three companions, each tied to a face button. Like a fighting game, combat features combos and specials, blending each incarnation's moves to stun, slow, and damage your foes. Lab Zero's signature art style brings those battles and locations to life with beautiful details and fluid animations.

Indivisible is slated for release in 2018 and is currently seeking funds on Indiegogo. You can support the game, and download the surprisingly lengthy and incredibly polished prototype, here.
Posted by Unknown at 12:57 PM