Title: Downwell
Developer: Ojiro Fumoto
Platforms: IOS Universal, PC
Price: $2.99
---
Gunboots are probably not the safest fashion choice, but safety isn't your concern in Downwell. Treasure awaits in the deep dark well, so down you go, entering a fast and frenetic downward shooter/platformer that definitely scratches the itch for a Spelunky/Binding of Isaac-style roguelite on mobile.
Yes, Downwell is a roguelite, so that means procedurally-generated wells, randomized enemy, random upgrades, and of course permadeath. Each attempt, you dive into the claustrophobic tunnel of platforms, ledges, and enemies, blasting away with your powerful gunboots.

But Downwell is no simple mindless shooter. Your gunboots can only fire a certain amount of bullets before recharging and they can recharge when you touch the ground, so the gameplay gains a layer of planning and depth. Carefully leaping around enemies to get in the best positions to fire, jumping on enemies to converse ammo, deftly avoiding hazards, is all necessary to survive.

Enemies range from relentless bats to ghosts that can phase through walls, among more dangerous variations, and they all pose a threat. Even the first stage can be hectic, and the worlds only get more challenging, introducing new hazards and enemies.

Thankfully, your fierce footwear is a versatile weapon, obliterating foes with punchy powerful blasts. Each weapon type feels distinct and forces you to approach your descent differently based on range, damage, and spread. The laser can pierce through multiple blocks with a single shot, while the noppy sprays out bullets wildly. Gather enough gems, and you enter a Gem High, a stat buff that boosts your attack damage as long as you keep the meter full by collecting gems.

Collecting gems allow you to upgrade your health and gunboot charges at shops, and between stages, you're able to choose power-ups that imbue your hero with new abilities. Jet boosts to slow your descent, eating dead enemies for health, causing dead enemies to explode when shoot, a drone companion, and many others. Power-ups can stack too, allowing you to mix and match effects. 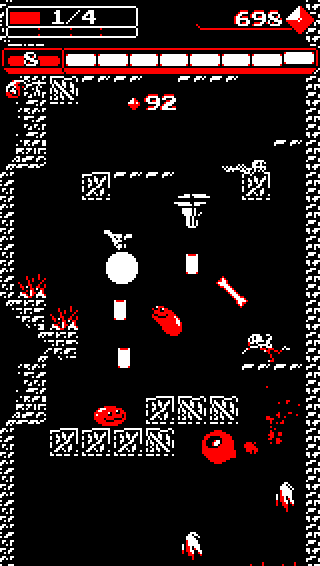 Downwell shines due to its subtle depth and challenging action. Like games such as Spelunky or Vlambeer's titles, it nails that amorphous element of "game feel", gameplay design that just feels satisfying and addicting and powerful.

You can purchase Downwell for $2.99. The game is also available on Steam.
Posted by Unknown at 8:52 PM