Title: Mushroom 11
Developer: Untame
Platforms: PC, Mac, Linux
Price: $14.99
---
We're all quite familiar with the standard platformer formula nowadays. Run around, jump over gaps, possibly some wall-jumping, dashes, and other maneuvers. But how would a platformer work if your character lacked limbs? Or had no concrete form at all? Mushroom 11 is a challenging physics-based puzzle platformer that turns the typical genre gameplay on its head by putting you in control of an amorphous fungus that can mold and shift into any shape.


The world is ruined. Humanity is absent, perhaps extinct or long gone, leaving only dilapidated cityscapes and overgown environments in its wake. But life continues, from weird insects to your character: a green fungus that absorbs other organisms and is nearly impossible to destroy. In fact, destruction is your means of movement. Using the mouse, you can erase parts of the fungus and it'll regrow those sections elsewhere on its form; through careful erasure, the fungus can flow through chapters with speed and agility by continuously growing in a certain direction.

But Mushroom 11's unique control scheme is used for far more than movement through destruction. You have no defined shape, able to mold into any form, and can be divided into multiple parts that can all act independently. Split in half to hold down a button with one part while moving the other through a now-open gate. Carefully shave off parts to extend into a tower to bridge a gap. Mold around ledges. Clamber up walls and across ceilings. One of the most important aspects of a good platformer is satisfying movement, and it never got old experimenting with and mastering Mushroom 11's free-form traversal. 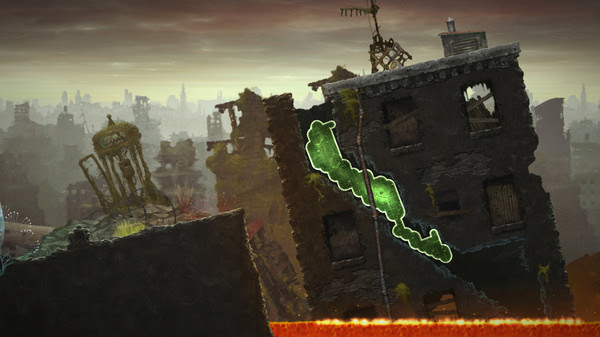 However, traversing the chapters is only part of Mushroom 11's challenge. Each section is rife with hazards and physics puzzles. From fireball-flinging organisms and lava to fungus-melting acid and challenging bosses, you need to carefully move around these dangers, considering how each erasure will affect your mushroom's form, weight, and balance. Later chapters will have you molding the mushroom into the shape of gear, shifting its weight around to stay within a speeding minecart, forming ramps for rolling objects, completing circuits, and much more.

Each chapter introduces new mechanics and dangers, always exploring new uses of the mushroom's amorphous design. The unique gameplay was Mushroom 11's initial hook, but discovering what new hazards and puzzle elements the developers would introduce next was what keep me intrigued throughout my six-hour playthrough. 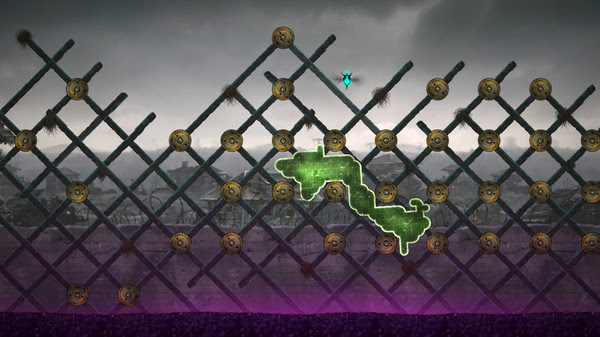 Mushroom 11 isn't just enjoyable to play, but also offers a atmospheric apocalyptic world to admire, an array of ruined cities, otherworldly environments, and faded graffiti that hint at the fate of mankind. The mushroom itself is always fun to watch, as it instantly reforms, or its insides pulse and rumble, or absorbed organisms dissolve into splashes of color within its green body. Each chapter features a ticking clock, offering replay value for fans of speed-running, and hard-to-reach insects that challenge the limits of your mushroom molding skills.

Mushroom 11 is available on Steam, Humble, and GOG. IOS and Android versions are expected to release next year.
Posted by Unknown at 2:15 PM