Doko Roko is a rogue-like, vertical platformer about strange magicks, weird swords, and the spread and mutation of ideas.

Locked in a tower stretching into the heavens, danger lurking on each level, you must ascend. Armed with only a blade and powerful magic learned from the tower's otherworldly denizens, your climb is fraught with intense battles, deft evasion, and skillful swordplay. Given its roguelike influences, death is inevitable in Doko Roko, perhaps at the hands of a warlock or a demon or a molten mantis. The foes that roam the tower, from sentient statues to powerful gods, are varied, but the magical arsenal at your disposal is just as diverse .

Your main weapon in Doko Roko is a sword, and a multitude of blades can be found: the shadow-tinged Beelzebuth Sword, the glinting blue Naive Hero Sword, the rusty Tarnished Sword, the Moss Sword, and many more, each with their own unique attributes. Supplementing your chosen sword is a selection of secondary items and powerful Forms. Items can imbue your character with a number of different skills and buffs to your maneuverability, defenses, and power, including a dodge roll, teleportation, slowing time, and a reflective shield. 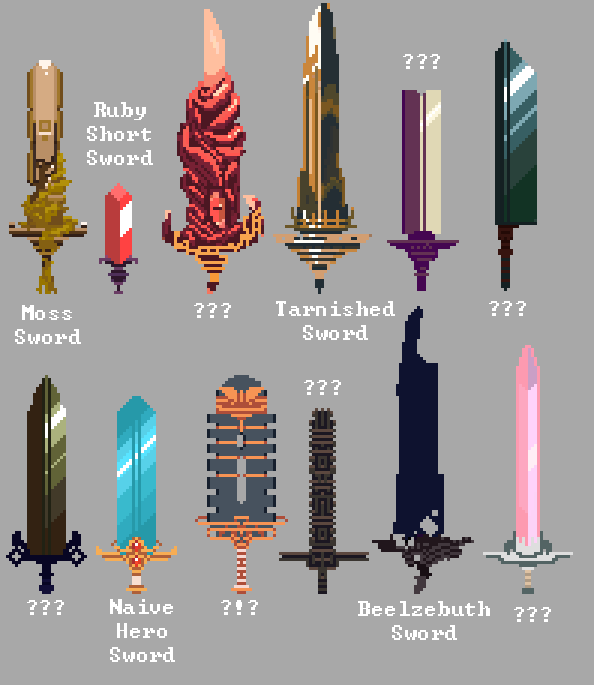 Forms are equal parts blessing and burden; one example is the Feral Form that saps your health and reduces your movement but massively increases the range of your attacks. These Forms can be acquired by pleasing gods or being possessed by some ethereal force, but you should always be mindful of the consequences. Exorcising the demon within or receiving forgiveness may be the only way to return to your previous Form.

Doko Roko is still in development. You can follow its progress on Twitter and the developer's Tumblr page. A Kickstarter is planned for October.
Posted by Unknown at 1:05 PM