Title: Super Mutant Alien Assault
Developer: Cybernate
Platforms: PC
Price: $9.99
---
On a freighter in deep space, danger lurks. Grotesque mutants emerge from within the walls, altered by radiation. And the only thing between them and your death is a lot of big guns and agile platforming. That's Super Mutant Alien Assault in a nutshell, a randomly-generated 2D shooter inspired by Super Crate Box.
Mutant Alien Assault was already a fun and addictive experience as a flash game, and this expanded version is bigger and better in every way. The core gameplay remains the same: armed with guns and other equipment, you must fend off relentless waves of aliens across random stages. Some stages are pure timed survival, while others have you transporting energy canisters or powering down overheated fuel rods. There's no story or narrative to consider here, just frenetic and colorful action.

Similar to Super Crate Box, you'll pick up randomized weapons, adapting your strategy on the fly depending on what guns you have. From the simple handgun to devastating sniper rifles, machine guns, rocket launchers, rail guns, and more high-tech armaments, the arsenal at your disposal is vast and varied, with new guns added to the pool as you progress. 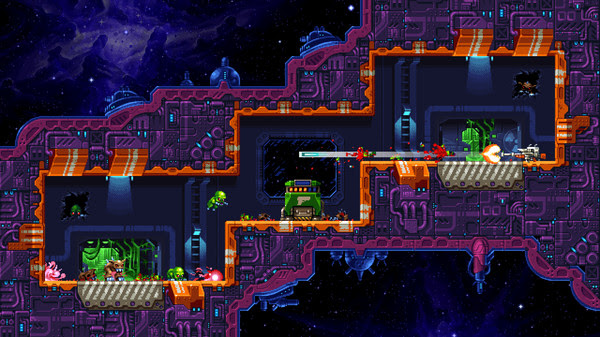 But your toolset is far more expansive than just guns. Your character can equip a whole suite of randomized gadgets, with slots for explosives, sidearms, defense moves, special abilities, and perks. This extensive loadout means there's your playstyle is always evolving, as you unlock new items for each category, including double-jumping, dashing and doge rolls, temporary shields, area-of-effect energy blasts, hacking, shockwaves, extra health and ammo, blades and explosive boomerangs, and much more.

You'll need every special ability and powerful gun because Super Mutant Alien Assault is a difficult  experience. Playthroughs start out relatively easy, but soon you're facing flying and charging foes and bosses. To add to the challenge, these enemies can evolve into more powerful versions if you don't kill them fast enough. 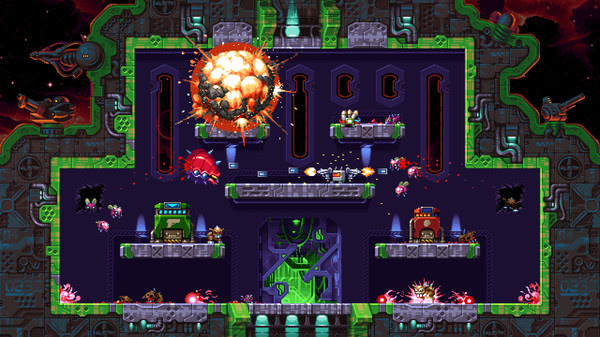 If the alien threat proves too overwhelming to handle on your own, you can team with a friend in local co-op, doubling the on-screen chaos. Super Mutant Alien Assault's pixel art action looks wonderful in motion, with fierce explosions and colorful stages and satisfying weapon effects that makes each new gun and skills a joy to try out.

Super Mutant Alien Assault is currently on Steam Early Access, and the developer promises more stages, enemies, bosses, new items and weapons. You can purchase the game on Steam and Humble.
Posted by Unknown at 3:08 PM