Title: Duskers
Developers: Misfits Attic
Platforms: PC
Price: $19.99
---
There are many ways a game can be immersive. First person games like Mirror's Edge use full-body awareness so you're controlling a body with heft and limbs rather than a disembodied camera. Gone Home, Amnesia, and The Room utilize tactile hands-on gameplay. And then you have games like Her Story and Uplink, where you're not merely controlling a character. You are the character, your computer screen acting as the in-game monitor, a direct window into the game's world.

The recently released Duskers fits in that latter category and this tactical sci-fi survival roguelike utterly succeeds at delivering an immersive, atmospheric experience,
The universe is dead. You are alone. Supplies are dwindling. Welcome to the bleak world of Duskers. As the lone survivor in a galaxy gone silent, you travel from ship to ship, derelict barges and stations and outposts now drifting through space. Fuel and resources diminish with every jump, as you desperately stave off starvation or avoid becoming stranded in the endless abyss.

But exploring vessels yourself is too dangerous because, while you may be the last human,...you certainly aren't the last organism. Death lurks everywhere, from alien horrors and active security systems to radiation leaks. 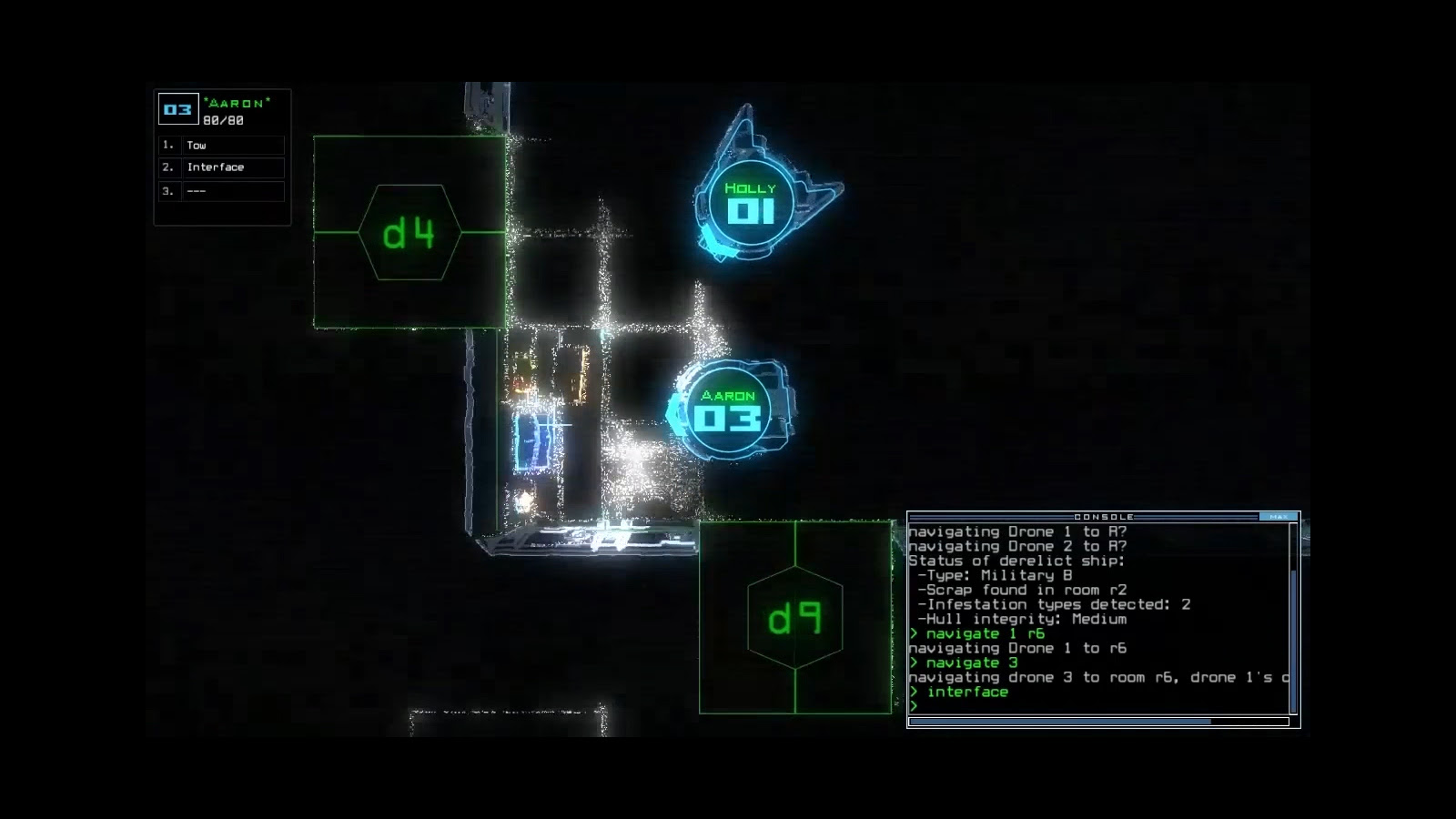 So you use the next best option, From your ship's console, you remotely guide drones through the dark rooms and corridors. You view the world through your ship's monitor and the drones' limited, grainy camera feeds, sensors and cameras that can fail or make errors. They act as your eyes, ears, and hands from the safety of your ship. And you don't guide these drones through icons or RTS-style controls, but by typing in command lines.

While it may sound archaic and clunky, the command line interface is part of what makes Duskers so brilliant and immersive. Every command must be planned and carefully considered, because if something goes wrong - and it will - you must adapt and improvise on the fly. It gives the game a deliberate, cautious pace, as you command your fragile drones to maneuver between rooms, use motion detectors, gather supplies, power generators, and so on. When you're hurriedly typing in commands as radiation is spreading through an outpost and power is failing and the creatures you had trapped in a room are breaking free, Duskers is at its most tense, thanks to that careful pacing and detached perspective. But Duskers is also a tactical experience. Scavenged gear can be used to modify drones with lures, cloaking, motion detectors, even the rare weapon, but the best tools are the vessels themselves. You can trap aliens in a room then activate a vessel's on-board defense system, or open an airlock to suck a roaming turret into space. Caution and planning ahead are how you keep your drones intact.

Duskers mixes moments of unease and fear of the unknown with satisfying strategy and on-the-fly improvisation. Similar to Her Story or Uplink, the command console interface results in an immersive intimate experience. You are the last human, controlling your drones, from your computer. 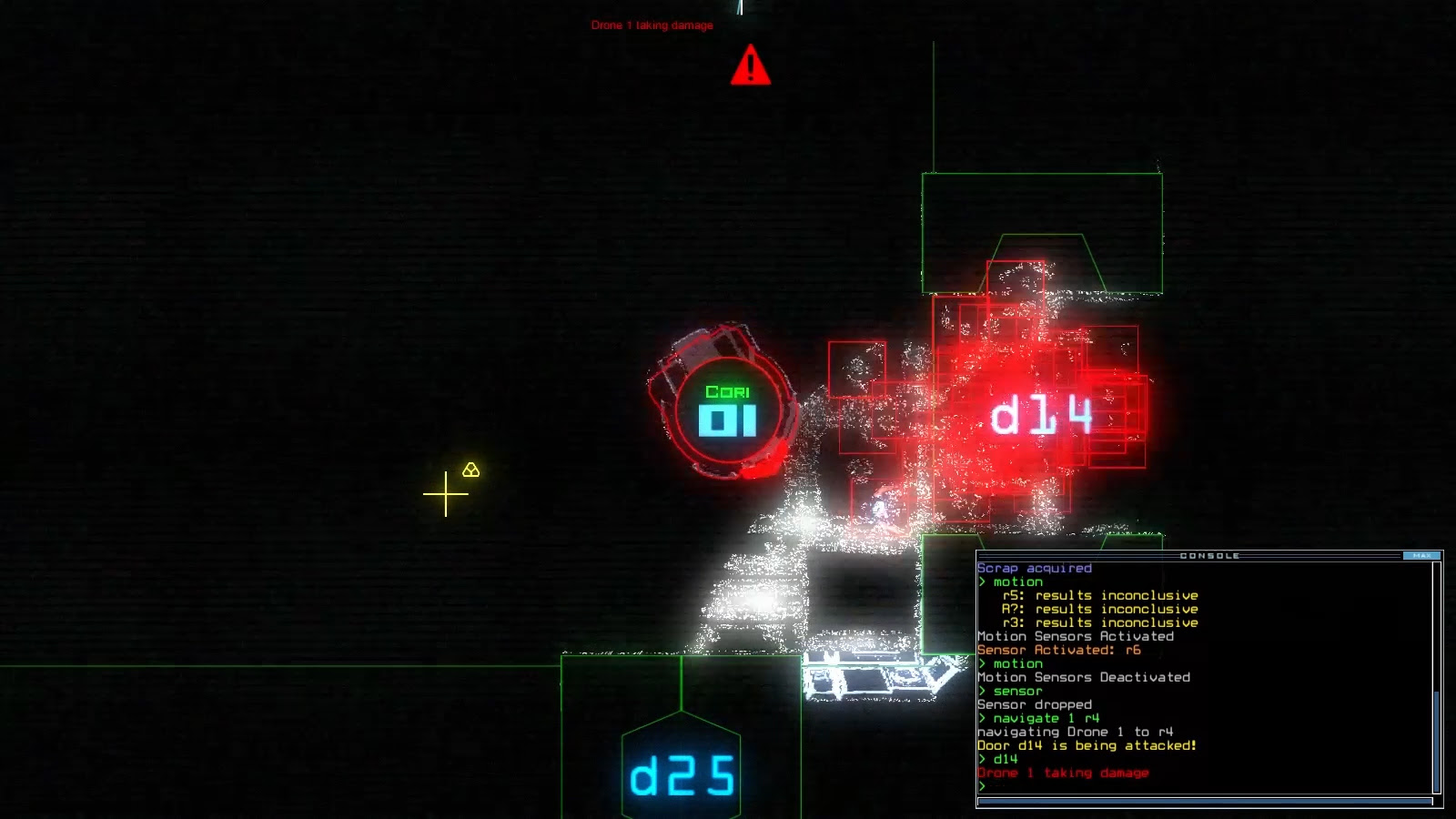 Duskers is on Steam Early Access, but it's already an engaging and challenging game. Procedurally-generated galaxies and ships mean there's a hefty amount of content, and the developers plan to expand the game with more drone upgrades and modifications, more visual effects, atmospheric audio, a finished story, and general polish.

You can purchase Duskers from Steam and Humble,
Posted by Unknown at 10:31 AM