Title: Lara Croft GO
Developer: Square Enix Montreal
Platforms: IOS Universal, Android
Price: $4.99
---
I'll start with a confession: when I first saw the screenshots and footage of Hitman GO, my impressions weren't exactly positive. I'm a big fan of the stealth franchise and it seemed like such a weird direction to take. But then I played the game and realized it was a brilliant distillation of Hitman's stealth-puzzle DNA into an experience built from the ground up for mobile. So to say my hype and expectations for the Tomb Raider-themed follow-up were high would be an understatement.

Lara Croft GO not only exceeds those expectations, but also refines the turn-based puzzle template introduced in Hitman GO, all in a gorgeous isometric package.
While Hitman GO presented its sneaky puzzles like a board game, Lara Croft GO sheds the tabletop veneer to deliver an action-puzzle adventure. The turn-based movement along paths remains, but it's no longer contained to flat surfaces and figurines. You guide Lara through ancient temples and dense jungle, past deadly traps and subterranean passages. This is an adventure in the full sense of the word, as levels flow together seamlessly and areas seen in the distance might be traversed several stages later.

Yes, traversal. The levels here are multi-tiered environments and Lara is as agile as ever, able to scale walls, shimmy along edges, and even pull off the occasional handstand. The handstand isn't the only callback to the main games; Lara's dual pistols return as well, as you deal with the numerous creatures found throughout GO's levels. Like in Hitman GO, you need to bump enemies from the side or back to kill them, but the combat is far more involved here. You might need to goad a lizard to chase you, or time your movement to avoid the poisonous fangs of a giant spider. Single-use spears let you skewer creatures from afar, and the environment is your greatest weapon, since traps and hazards can kill creatures.

However Lara Croft GO wouldn't be compete without environmental puzzles and all the elements you'd expect are here: pillars to push and pull, switches and pressure pads, platforms to raise. Given the turn-based nature of the gameplay, puzzles rely heavily on timing and figuring out the optimal path through the levels so you can avoid danger while activating switches or getting platforms into position. While the grids are smaller than the ones in Hitman, Lara Croft focuses more on interactive elements and environmental dangers to add challenge and variety to its puzzles.

Lara Croft GO visuals are just as impressive and polished as its gameplay. The board game aesthetic is gone, and in its place is a colorful isometric world filled with detail and life. Foliage sways in the breeze, lizards test the air with forked tongues, waterfalls drain out over cavernous drops. Each chapter, divided between different Mazes on your journey to a mysterious artifact, has a different visual tone, from the cliff-side ruins of the Maze of Snakes to the underground ruins and murky swamps of other levels. That visual polish even extends to the stylish menu and minimalist UI. An atmospheric soundtrack completes the engrossing presentation. 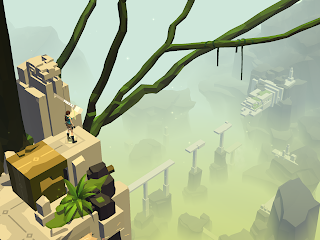 Lara Croft GO truly impressed me in how it adapted the turn-based puzzle gameplay seen in Hitman GO to Tomb Raider's platforming-heavy adventure. Once again, it distills the core aspects of a franchise - the exotic locations and ruins, the dangerous traps and creatures lurking within, environmental puzzles and agile climbing - into a mobile-friendly experience that's simple to control but still challenging and engaging.

If there's one gripe, it's that the game lacks the replay value of Hitman GO, with no collectibles that require extra puzzling to reach, optional challenges, or move pars to beat. There are gems and hidden relics to find, which in turn unlock new outfits, but those are hidden in the background rather than extra gameplay elements. But I imagine those elements would tarnish the atmosphere and adventure vibe, so perhaps the experience is better without those aspects.

Lara Croft GO can be purchased for $4.99 (Also on Android).
---
*Okay, so Lara Croft GO is a slight deviation from the usual games I cover, but with a mobile game this good, I really wanted to share my impressions, and honestly I put it in the same category as Grow Home and Valiant Hearts, aka games from larger publishers that are more indie game-esque than their usual work.
Posted by Unknown at 9:02 AM