Title: Space Engineers
Developers: Keen Software House
Platforms: PC
Price: $19.99
---
It's safe to say that construction games have exploded in popularity in recent years. Space Engineer takes that core building-focus and places it in zero-g expanse of space, complete with detailed visuals, multiplayer, and physics-based chaos.
Across Space Engineers' single-player, multiplayer, and survival mode, you have one main goal: build stuff in its space sandbox. From small vessels to sprawling cruisers and expansive stations, physics, zero-g flight, and the detailed atmosphere makes the construction fun and engaging. Alone, the game can become boring (although survival mode makes for that aspect with its modifiers such as limited oxygen and fuel), but with friends, Space Engineers' true potential is revealed. Colliding head-long into your friend's ship, leaving debris and shattered vessel in your wake, mounting weapons and engaging in extraterrestrial dogfights among the asteroids, enduring a meteor shower, or just working together to build some elaborate structure while balancing oxygen and other needs, Space Engineers is most fun when you're working with (or against) others. Scenarios such as a salvaging a crashed ship or lone survivor add more replayability and challenge. 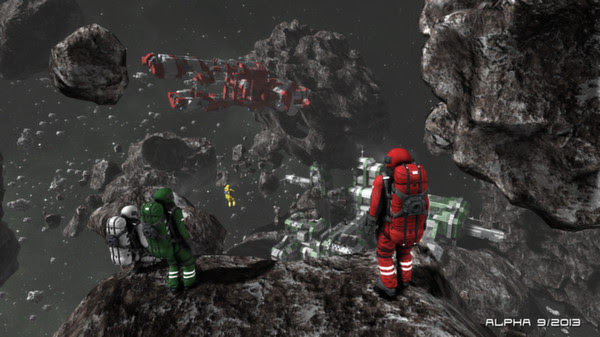 Space Engineers is still in development, with new features being added regularly; the most recent update introduced new block types and ship cockpits. You can learn more about Space Engineers here and purchase the game on Steam Early Access or Humble.
Posted by Unknown at 11:45 PM