Title: David.
Developer: Fermenter Games
Platforms: PC, Mac, (IOS soon)
Price: $2 (currently on sale for $1)
---
I discovered David. while browsing IndieGameStand and was instantly intriguing by its unusual combination of inspirations: "Limbo + Shadow of the Colossus + Angry Birds". While I still think the Limbo influence is slight at best, David. certainly is a fun physics-heavy game with a focus on boss fights and large dangerous foes.

David. presents a abstract world of shapes and angles. Your little square is embued with a powerful weapon and tasked with destroying nine dangerous bosses. From a hub area, you travel to these arenas and face these enemies. They are large angular masses of shapes, moving with oddly animalistic menace. One is a lunging, almost bull-like enemy, another a flying cluster that hones in on you as you deftly evade it. Skillful maneuvering, precise aim and timing is needed to succeed; even just learning how to use your weapon takes some practice, as you need to find the rhythm of charging your shot, catching the pellets as they return to you, and utilizing the slow motion effect to your advantage. Each level can be played in normal difficulty and a hardcore mode in which you only have one cube of health. Alongside these boss fights, David. features a survival mode with light RPG elements, that lets you collect gold to level up your character as you face more challenging and varied waves. 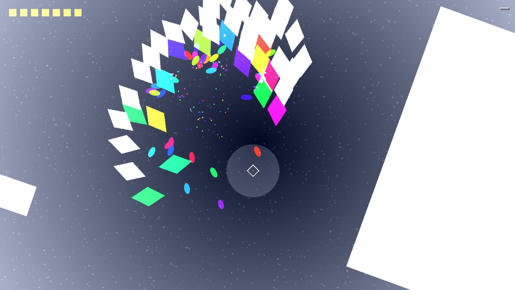 David. may not seem that impressive from screenshots, but in motion and when playing, it's revealed to be a fun varied stylish game. While I really like the abstract minimalist visuals, the gameplay is what truly shines here: discovering each new boss, lining up shots as you fly through the air, the intense close calls. You can purchase David. on its official site and IndieGameStand, and follow the developer on Twitter here. The game is also coming to IOS soon.
Posted by Unknown at 7:56 PM