Title: Sometimes You Die
Developer: Kamibox
Platforms: IOS Universal
Price: $1.99
---
I only knew Kamibox due to its excellent precision arcade game Cyro, so I wasn't sure what to expect when starting Sometimes You Die. A unique puzzle platformer, I enjoyed my time with this unique game
Sometimes You Die is quite minimalist. There isn't even a menu; the game starts and you're simply playing. Right off the bat, the game stands out visually with its Limbo-esque visuals contrasted by the stark white letters highlighted in the background. While Sometimes You Die is a puzzle platformer, it's also delivering a story, one any gamer can appreciate, as it presents questions about the nature of gaming. Fans of The Stanley Parable will appreciate the philosophical musing about what defines a game. However, Sometimes You Die is also an actual game. While the game is short (I beat it in a little over an hour), the gameplay is fun, controls are responsive, and the mechanics are linked to the subtle narrative being told. The game is not actually that difficult; death is never an end but a tool to be used. Your dead selves stay behind, stuck on spikes, jammed against saw blades, to be used as stepping stones and protection from hazards throughout the game's eight chapters. Completing the game once unlocks a new ability and the challenge of completing it with as few death as possible. 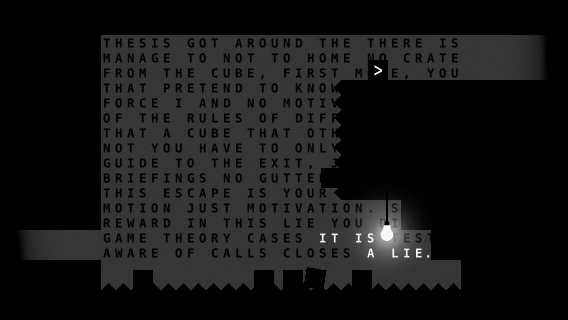 If you're looking for a hardcore precision platformer or a challenging puzzler, you might be disappointed. But if you're looking for a stylish game that combines gamplay with story and has a message to tell, one that will appeal to gamers especially, I think you'll enjoy Sometimes You Die. You can purchase the game for $1.99.
Posted by Unknown at 7:05 PM