No Money, No Problem: Corridors of Uncertainty

Title: Corridors of Uncertainty
Developer: Frank Force
Platforms: PC
Free pre-alpha
---
I discovered Corridors of Uncertainty (and by extension, Frank Force's entire library of awesome freeware games) sometime last week, and while the rest of his games are all high quality, fun, and inventive titles, I've been playing Corridors of Uncertainty ever since. For what is essentially a pre-alpha build, CoU feels polished and very playable even at this early stage.
Corridors of Uncertainty is a top-down arcade action roguelike inspired by game like Robotron, Hotline Miami,and Loaded. Set in sprawling procedurally generated maps, you guide your futuristic hero to the teleporter in the level, mowing down well-armed enemies and drones along the way. Between pistols, shotguns, assault rifles, and powers ranging from slow motion to a speed dash, you have a nice variety of weapons to use. For a pre-alpha, the CoU already feels fun to play; the shooting feels tight and satisfying, the powers are fun to use, the effect sand lighting quite impressive. The sci-fi style, destructible environments, and powers make the game stand out from other action roguelikes. Gameplay can get hectic, but conserving ammo and using your abilities allow you to overcome the most dangerous areas. 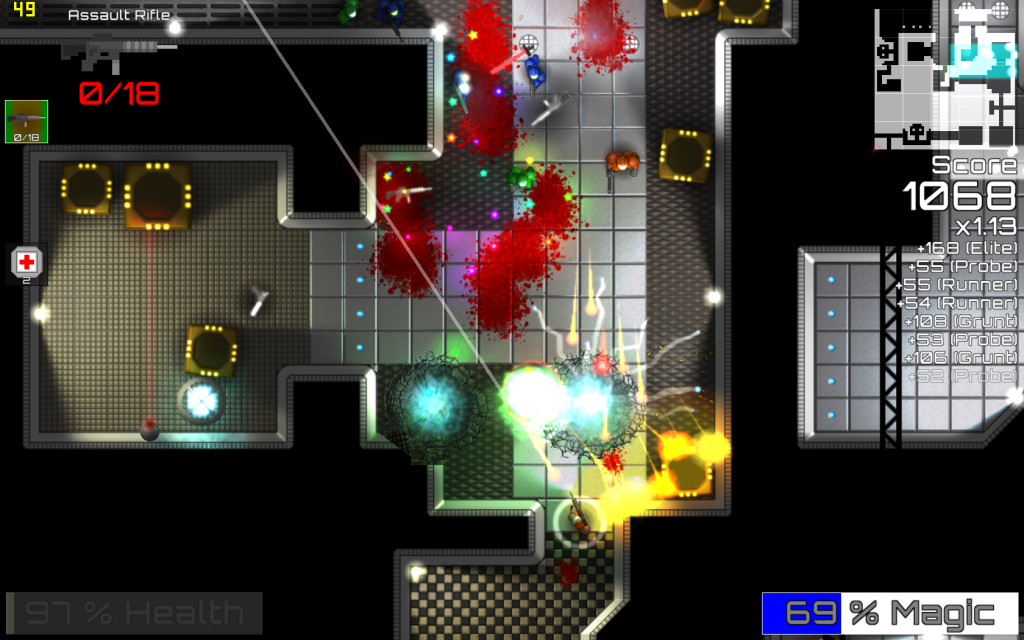 Corridors of Uncertainty is only in pre-alpha, with the developer planning on adding more weapons, abilities, enemies, upgrades, and just more content overall in the months to come. You can download the game here.
Posted by Unknown at 4:08 PM

Email ThisBlogThis!Share to TwitterShare to FacebookShare to Pinterest
Labels: Corridors of Uncertainty, No Money No Problem, PC