Title: 10 Second Ninja
Developer: Dan Pearce
Platforms: PC, Mac
Price: $9.99
---
As a title, 10 Second Ninja is a lie. Yes, you control a ninja in the game, but if you're taking ten seconds to beat a level, you're doing something wrong. Lightning fast, challenging, and addictive, 10 Second Ninja is an excellent precision puzzle platformer.
Each single screen level has a number of Nazi robots and it's your job to destroy them as fast as possible, all while avoiding spikes, gaps, portals, crushing icicles, and other hazards. But while it's easy to die and the controls are tight and responsive, 10 Second Ninja isn't best compared to games like Super Meat Boy or Electronic Super Joy. At its core, 10 Second Ninja is repetitive. You have a sword, limited shuriken, and the robots never move or attack. You'll play a level,  beat in 5 seconds, and see you're only awarded one star. Repeat, again, faster. Repeat, again, each time, shaving off seconds, milliseconds, mastering a level through death and instant restarts. And yet this never became boring, but rather quite the opposite. Each level is a puzzle of learning the best route to effectively use your attacks and platforming to clear the screen as fast as humanly possible. Gameplay becomes a rhythm of restarts, refining, improving. Seeing your time shaved down with each attempt and finally achieving that three-star time is very satisfying. The silly humorous cutscenes between chapters offer a much needed respite from the fast-paced gameplay. 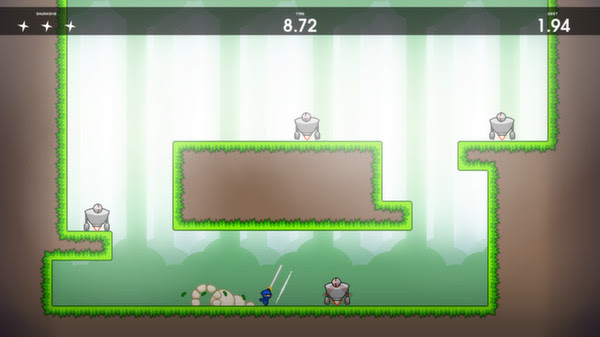 Some may find 10 Second Ninja boring but similar to Demons' Souls, death and repetition is a tool and a learning process rather than a punishment. The solid controls (best with a gamepad), cute colorful visuals, and precision challenge makes this game a welcome addition to the genre. You can purchase 10 Second Ninja on Steam and GetGames.
Posted by Unknown at 10:06 PM