Play as the head of a gladiator school

If you've seen Starz's bloody stylized Spartacus, you're well versed in the concept of a ludus. The ruthless brutal training, the wealthy domini overlooking their warriors, the practice duels, the blades and shields and helms. The in-development Ludus places you in control of a titular school, as you manage your gladiators and train incredible fighters to appease the bloodlust of the crowd.

Ludus is essentially a blend of business management and RPG. The Coliseum, fame, and favor await, but first you must purchase, train, and equip your gladiators. The game is turn-based, divided between a management phase and battle phase. In the former, you can acquire new fighters, improve your training staff, gather better weapons and armor from shops.

But most importantly, you must navigate the social spiderweb that is the Roman elite. Friends and foes, allies and rivals, wealthy sponsors, Ludus will let you develop relationships and react to events that can affect your ludus, gladiators, or your own reputation. And much like in Spartacus, sometimes success in the arena requires some backstabbing outside.

The arena combat will be akin to the bouts of games like Punch Club and other management games. As trainer and owner, you won't be controlling your gladiator directly, but rather giving orders regarding stance and intensity of attacks. The aptitude and performance of a gladiator will depend on your training and their equipment, from sword and shield to crushing sledgehammer to trident.

But winning isn't enough; you want to give the crowd a show, and also make sure your pre-fight hype and behind-the-scenes machinations make the battle a pleasing spectacle. Gladiators will even have personalities, basically hero or villain, to further enhance the crowd-pleasing elements of a fight. 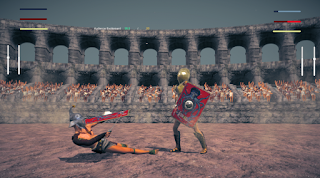 You can learn more about Ludus and follow its development on the game's blog.
Posted by Unknown at 11:41 PM

Email ThisBlogThis!Share to TwitterShare to FacebookShare to Pinterest
Labels: Ludus, PC, The Watchlist