Title: Super Arc Light
Developer: No Code Studios
Platforms: IOS Universal, Android
Price: $0.99
---
There's almost something refreshing about those pure and simple games like Super Hexagon or Canabalt or any other of those simple-to-control, laser-focused, arcade-y experiences. Super Arc Light is another entry to that list, a radial shmup that only requires a single finger to control but focus and timing to succeed.
Super Arc Light's set-up couldn't be more simple: there's a base in the center of the screen, there's a single turret guarding the entrance's perimeter, and there's an endless wave of geometric enemies approaching. It's a formula as old as Space Invaders, presented here in a slick minimalist style, colorful rounds contrasting against the stark black-and-white battleground. There are no extra modes to unlock, no alternate difficulties, nothing to upgrade. Super Arc Light is pure distilled shooting action.

Shooting those encroaching waves is easy as well. Your turret automatically travels around the base's circular entrance; holding down slows time and fires your weapons, while letting go causes you to reverse direction and rotate the opposite way. It may take a few attempts before you get a handle on the one-touch control scheme, but when you do, combat becomes a hectic back-and-forth dance as you swing back and forth to deal with enemies on one side, spinning around to take out a new pattern, then back again to grab a power-up. 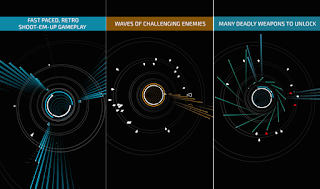 While the lack of gameplay of modifiers or modes means Super Arc Light might get repetitive after a while, the simple, direct, easy-to-control but not-easy-to-win gameplay makes it perfect for those quick sessions when you need an instant adrenaline boost of action. You can purchase Super Arc Light for $0.99 on iOS and Android.
Posted by Unknown at 5:59 PM