Title: Devil Daggers
Developer: Sorath
Platforms: PC
Price: $4.99
---
In the beginning, there's only silence. Your ember-veined hand, a hovering dagger, a single platform suspended in an endless black abyss. But don't be fooled by that initial calm. Devil Daggers soon becomes a cacophonous onslaught of eldritch horrors and the strafing, rocket-jumping action of classic Doom and Quake.
Break down Devil Daggers - mechanics, controls, visuals, sound, and so on - and in isolation, its gameplay is quite simple. You essentially have two weapons, a rapid-fire stream of daggers and a powerful spread-shot. Level design amounts to a single bare arena without walls or barriers of any kind. You die in one hit. There are no pool of equipment and perks to unlock, no other modes to play, no story. It's pure arena combat, against relentless odds.

But Devil Daggers doesn't need those extraneous elements to deliver. Your moveset is deeper than it first seems, allowing for rocket dagger jumping, double jumping, and other advanced means of evasion. There may even be some special dagger-enhancing powers that emerge if you survive long enough. That simple game design doesn't hurt Devil Daggers, instead giving it laser focus. Without needing to worry about ammo or health or juggling an inventory, the focus shifts to evasion and environmental awareness. It's a game of constant movement, of maximizing every split-second of safety to calculate a route through incoming foes.

And what foes the game has to offer. Tentacle-tipped towers that vomit forth swarms of skulls. Hulking arachnoid beasts with too many furiously twitching legs. Spinal cord serpents that twist and coil through the air. Crafted in a rough old-school aesthetic and fluid animations, Devil Daggers' bestiary is one of bone and flesh and appendages. Demonic things that fill the air with an oppressive symphony of roars, rattles, distorted shrieks and skittering legs, wet flesh and echoing moans. Each creature sounds unique, alerting you to when and where a new threat enters the arena even if your attention is elsewhere. The incredible sound design is that key aspect that completely elevates Devil Daggers' atmosphere, truly making it feel like you're facing something otherworldly.

But even as your skills grow more honed, and your attempts grow longer, eventually death will come, and the addictive drive to ascend the leaderboards begins. In a smart touch, a replay of the best attempts are saved, meaning you can watch the runs of the top scores and see their tactics and tricks. 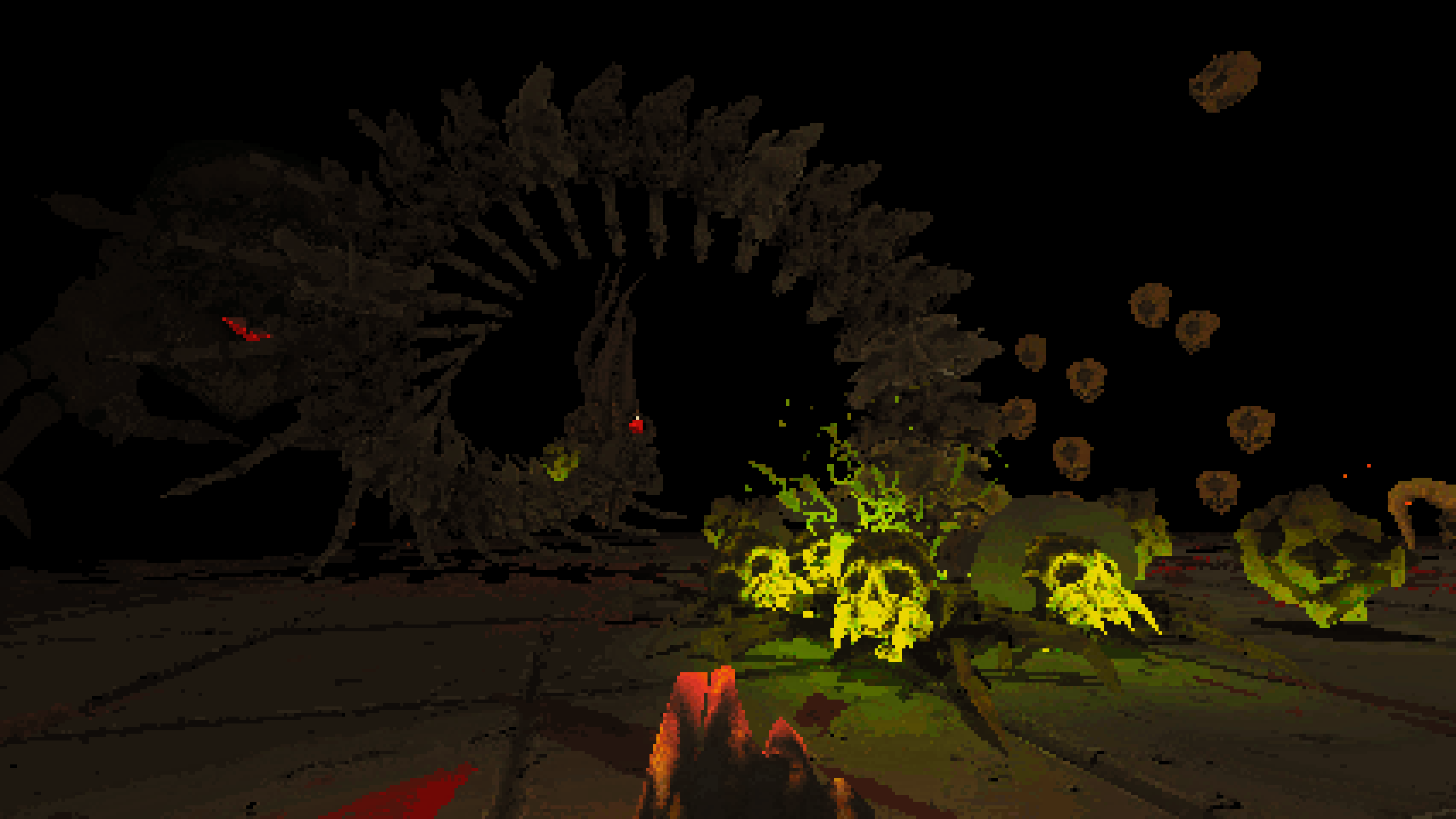 Devil Daggers costs $4.99 and is available on the developer's site and Steam.
Posted by Unknown at 11:06 PM