The Watchlist: Song of Horror

Developer Protocol Games first revealed Song of Horror earlier this year. Unfortunately, their first attempt on Kickstarter failed, but now the game is back, Greenlit on Steam and slated for consoles, and looking even more terrifying.

Song of Horror is a survival horror game that promises to blend the old-school fixed angle horror of classic Resident Evil and Alone In The Dark with a modern approach. You control the fates of 16 characters, all haunted and stalked by an insidious eldritch Presence, a cast of normal men and women against an ancient cunning evil.

While the characters in Song of Horror are weaponless, they aren't defenseless. You can run, and hide, slow its advance, avoid its shadowy clutches by carefully watching and listening for clues, But if the Presence does kill you, the story isn't over. Similar to games like Heavy Rain and Until Dawn, Song of Horror features a narrative that molds around character deaths.

I was able to try out an early demo of the game, featuring the first chapter set in the Husher Mansion. (Each chapter takes place in a different location.) For a game that still at least two years away, Song of Horror already feels polished and promising. Don't expect many jump scares; the tension and dread here comes from knowing you're not alone; that you're being stalked by a force that can kill you in a moment anywhere anytime; that can't be stopped, only slowed and avoided. The experience is one of measured pacing, cautious careful exploration, and moments of desperate flight as you try to outrun and delay the Presence. 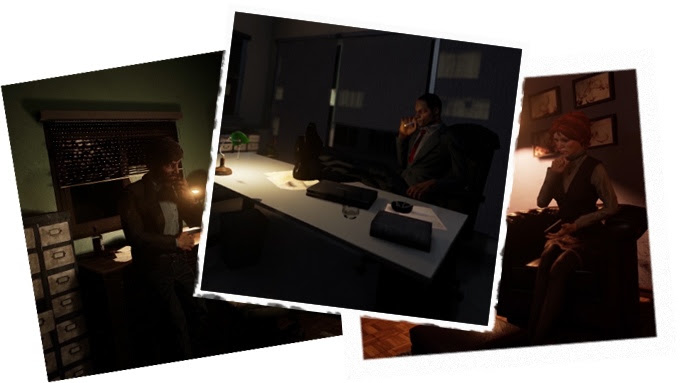 Song of Horror is currently seeking funds on Kickstarter, and is expected to release in mid 2017. You can learn more about the game here; the demo should be releasing publicly soon.
Posted by Unknown at 11:53 PM