Title: Splasher
Developer: SplashTeam
Platforms: PC
Releasing late 2015/early 2016
---
Splasher is a 2D Platformer in which you are tasked with unleashing the power of paints to rescue your brothers. These little fellows, called the splashers, are prisoners in a giant paint manufacture : INKORP.  While water is your primary weapon to defeat weak enemies and activate mechanisms, paint is where your true powers come from. Thank to the differing colors and their properties, you will stick to walls and roofs, bounce high in the air, trick your opponents and do many more to reach Inkorp’s top levels !
You've probably seen Splasher's central mechanic in other games before, perhaps the DigiPen game Tag: Power of Paint or more recently Portal 2. This colorful platformer takes that spray mechanic and mixes it with the fast-paced precision gameplay of Super Meat Boy. Equipped with his nozzle-pack, the titular Splasher uses an array of various colored paints to traverse gaps and evade the myriad hazards within the INKORP facility. Paint proves to be a versatile tool, allowing you to defy gravity and scramble along any surface or bounce to great heights and off walls. This isn't a game of careful planning and puzzles; in fact, aiming and movement are all done with the left stick (trust me, use a controller). Splasher is all about speed and movement, spraying on the go, mid-air or running across the ceiling. 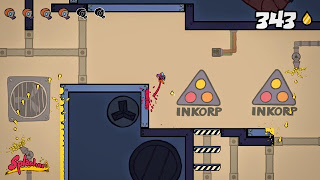 Your paint arsenal is more than just a means of traversal; when faced with enemies, either while running or when locked in quick arena battles, each spray type reveals alternate offensive uses: your default water damaging foes, sticky red trapping enemies temporarily, and bouncy yellow knocking them back. Combining these abilities along with environment hazards like lasers and saw blades allows you to deal with the demo's foes and furthermore, hints at the kind of unique challenges that Splasher could deliver with more paint types, enemies, and hazards. 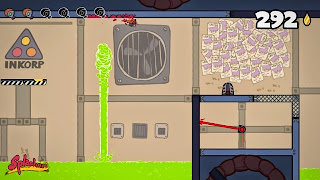 Splasher is still early in development, with a release planned for late this year or early 2016. But even at this early stage, the game impresses with its colorful style, fluid animations, and challenging gameplay. You can download the three-level demo from the game's site and follow Splasher's progress on Twitter and Facebook.

Email ThisBlogThis!Share to TwitterShare to FacebookShare to Pinterest
Labels: PC, Splasher, The Watchlist